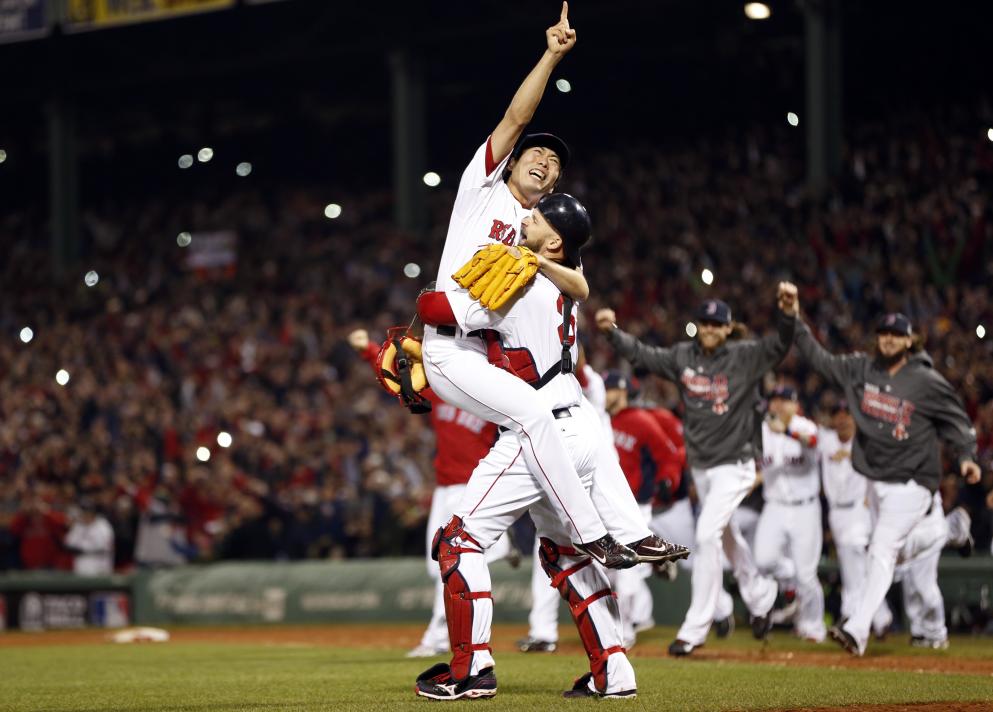 This is unreal. This team was picked to finish last in their division. Fans were hoping that they'd flirt with .500 and contend for a Wild Card spot. 108 wins later and it's duckboat time.

The bats finally woke up Wednesday night. Shane Victorino and Mike Napoli returned to the lineup. People not named David Ortiz got big hits. Victorino had a massive impact, going 2 for 3 with 4 RBI. Napoli hit an RBI single in the 4th. Victorino's 3-run double in the 3rd came with 2 outs. So Michael Wacha was only an out away from escaping that inning, just like he escaped the 2nd. Five of the Sox' 6 runs were scored with 2 outs.

It was only a matter of time before the bats woke up. And that the 22-year-old Wacha was knocked around. Who was going to adjust better after Game 2? Wacha to the veteran Sox batters, or the Sox batters to Wacha? The Sox lineup isn't loaded with stars, but it's packed with savvy players that know how to work at-bats and figure out pitchers.

The Cardinals did not figure out John Lackey. He wasn't dominant, but he made pitches when he had to. He allowed 9 hits in his 6.2 innings. He seemed to save his best pitches for the most important at-bats. He struck out Jon Jay with runners on second and third in the 2nd inning. He struck out David Freese to end the 4th, also with two runners on. Of the 9 hits he allowed, only 1 wasn't a single, and only 1 was allowed with runners in scoring position.

The Sox scored 5 of their 6 runs with 2 outs. Lackey shut the Cardinals down with 2 outs, at least until the 7th. Wacha's inability to get the third out and Lackey's ability to get it was the difference in this game.

What can you say about this team?

They never learned how to lose.

The 2011 and 2012 Sox found ways to lose. They seemed to go out of their way to lose. This team never learned how. They never lost more than 3 games in a row all season long. And they only had five 3-game losing streaks. Only one of those streaks came after the All-Star Game.

They found ways to win. When a reliever blew a save, the offense would rally. When the offense struggled to score, the pitching would bear down. Down 5-1 in the 8th against Detroit? No problem. David Ortiz will hit a Grand Slam to tie it.

I can't wait for Spring Training.