B'S GET A FOR EFFORT 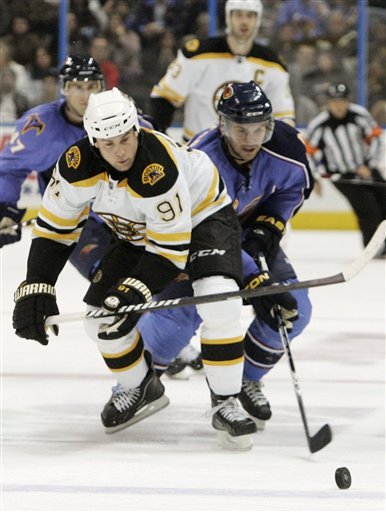 I really can't criticize the Bruins much for their loss last night. They played well in all three zones, they got 44 shots on net (18 in the 3rd alone), they just ran into a wall in goalie Ondrej Pavelec, who had a truly top notch game in net.

There was also a set of officials that called some ridiculous ticky-tacky stuff. I only wish Tommy Heinsohn were there to see it. The Bruins did get one power play from this soft kind of officiating, but Atlanta got three, and scored on two of them.

And it wasn't even like the Bruins PK unit played poorly when they allowed the goals. Nor did Atlanta's PP unit excel. They were token shots on net that found their way through Thomas.

The one criticism I did have was the fact that Thomas was in net. He looked sluggish against Tampa Bay, and in my last post I mentioned that Rask should have played this game. Would that have changed the results? Would a fresh Tim Thomas stop one of those goals, or do better in the shootout? Who knows.

The Bruins are in Buffalo Saturday night. They're also ahead of Montreal by 3 points, with 2 games in hand.