The big news is that both Drew and Lowell are starting.

I personally would have gone with a faster pinch runner type of player as opposed to three catchers, but that's not too big of a deal.

Source:
WPRI
Posted by rob at 4:34 PM No comments:

This is the 4th time the Red Sox and Angels have met in postseason play. The Red Sox have won all three previous series. The Angels haven't beaten the Sox in the playoffs since the 1986 ALCS.

Josh Beckett was pushed back from Game 1 to Game 3 due to an oblique injury suffered in a bullpen session. This means Jon Lester will take the mound for the Sox to start the series. Opposing him is John Lackey.

Lester's history against the Angels isn't a good one. In 4 career starts he's 1-1 with a 7.78 ERA. This year he had a 5 inning, 4 run no decisions against them. But that was back in April. He finished that month with a mediocre 4.31 ERA. He'd finish the season with a 3.21 ERA. Since the end of April, Lester is 15-4 with a 2.97 ERA. He won AL Pitcher of the Month for September, and he's become the Ace of the Red Sox staff.

John Lackey finished the year 12-5 with a 3.75 ERA. The big righty actually did worse facing righthanded batters. He allowed a .301 average and 14 of his 26 HRs allowed were hit by righties. He was 2-0 against the Sox this year. He had a complete game, 2 run outing on July 29th (in the midst of the Manny Ramirez saga), and a 7 inning effort in an 11-3 Angels win earlier in July.

The major advantage the Angels have in this series is their bullpen. The Red Sox have Papelbon - who may or may not be close to exhaustion from overuse this season - the Angels have Francisco Rodriguez (the nickname K-Rod sucks), Justin Speier, Scot Shields, and a resurgent Darren Oliver. But this isn't as good as the Angels bullpen that won them the Series in 2002. This is still a beatable bullpen. Speier is 2-8 with a 5.03 ERA, Shields had 5 blown saves, the Sox have a combined .294 average against Oliver. 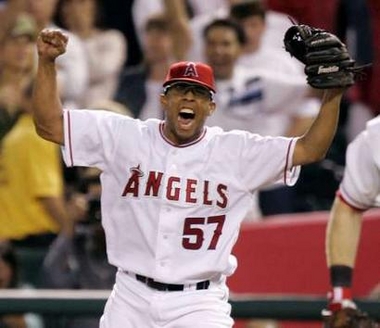 I think the Sox will go to ANAHEIM and split, winning Game 1 tonight, losing Game 1 on Friday. Lester will have a strong outing, the Sox will get to Lackey for 3 or 4 runs, and win 4-2.

JD Drew said he was "100 percent" for the ALDS. No official word yet on whether he'll be in the starting lineup or not. Same goes for Lowell, although all the news has been positive the past few days.