Tonight at the Garden, the other March Madness continues with the Hockey East semifinals.

5:00pm - NESN/NBC Sports
#1 BOSTON COLLEGE vs. #7 PROVIDENCE COLLEGE
The Friars surprised UMass-Lowell last weekend to advance to their first Hockey East semifinals since 2001. however, BC has won 13 straight games. Two of those came against Providence (3-0, then 7-0). The Eagles are on fire. Their power play is clicking, and goalie Parker Milner has found a groove. BC will advance to their 3rd straight Hockey East Final, their 6th in the last 7 years.

8:00pm - NESN/NBC Sports
#3 BOSTON UNIVERSITY vs. #4 MAINE
It's hard to pick against BU after their dramatic series against UNH. The Terriers have had so much self-inflicted adversity this season, but they've managed to persevere. Maine beat BU at Agganis twice in late January, but the Black Bears' season has been defined by inconsistency. I think BU grinds out a tough win, possibly in OT.

That would set up a classic BU/BC final. BU won the regular season series 2-1, but BC won the Beanpot. And as well as BC is playing right now, they'll be tough to stop. BC will win their 11th Hockey East Tournament Championship.

The Final will be Saturday night at 8:00pm, on NESN locally and NBC Sports nationally.

The Bruins signed 21 year old goalie Adam Morrison to a 3 year deal. Morrison had been playing for the Vancouver Giants of the WHL, the same Juniors team that produced Milan Lucic.

He was drafted by the Flyers in the 3rd round of the 2009 draft but became a free agent after two years when Philadelphia didn't sign him.

I doubt you'll see him in a Boston Bruins uniform this season unless somebody gets injured, or Marty Turco gives up 10 goals in a period. He adds depth to the bottom of the Bruins' goaltending depth chart.

There Are Racists in Mississippi?

Anyway, these weren't random Southern Miss fans, these were people whose trip to Pittsburgh was paid for by the school.
Posted by rob at 11:00 AM No comments: 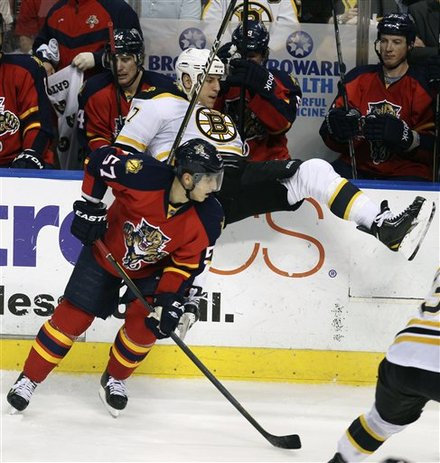 For the first time in a few weeks, the Bruins outdid their opponent in an aspect of the game. Unfortunately, that aspect of the game was which team was trying hardest to lose. The Panthers made so many mistakes, from giveaways in their own zone, to Theodore's trapezoid penalty. The Bruins failed to capitalize, and made more than a few mistakes on their own.

The difference between a clean breakout pass and a giveaway that results in a goal is just a foot or two. The Bruins have found ways to turn these simple plays into game-changing mistakes.

Corvo's not the only problem. Nobody on the Bruins is playing well. And if they do, it's just for one or two shifts per game. Right now, the Bruins best player is Shawn Thornton. No offense to #22, but that's sad.

Bruins host the Flyers Saturday afternoon. And if Ottawa beats Montreal tonight, the Bruins will be in 2nd place in the Division, and 7th in the Conference.