TAKE THE GUN, LEAF THE CANNOLI 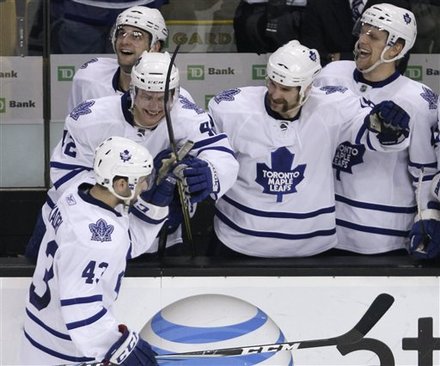 The Bruins finally played someone who played with effort and determination. And they lost. And without some soft goaltending by James Reimer, they would have lost badly.

It's the same laundry list of problems for the Bruins. Not managing the puck well. Not being able to breakout of their own zone. Not hustling for loose pucks. And a boring Power Play.

For about 2 seasons now, the B's have tried the same static, motionless Power Play strategy. How come they haven't tried something different? It's so easy for opposing PK groups to sit in a box formation, and play the predictable passing lanes, allowing the Bruins to pass around the box, but not into it. Moving bodies around moves those lanes around, which forces the penalty killers to move. That can lead to 2-on-1s in shooting areas. That leads to quality shots, which lead to goals.

The Bruins continue to drift toward the playoffs. And if they step it up in the postseason, then great. But I'd rather see them build some good habits now, and try to maintain those habits for an extended period.