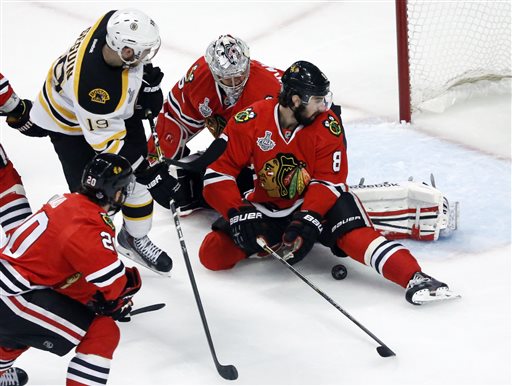 Tyler Seguin this, Tyler Seguin that. Yesterday sports radio was electrified with criticism of the 21-year old. He's only scored 1 goal in the playoffs. And he only scored 16 goals (pace for 27 in an 82 game season) in the regular season. The expectations were high for Seguin, and he hasn't come close to reaching them.

How much are the Blackhawks focusing on shutting down Seguin? That's all you need to know about how much of a non-threat he has become.

He's an incomplete forward. He has unreal skills with the puck, and he's fast. Under Julien he's learned how to play solid defense, and he uses his speed to back check well. However, on offense, he hasn't learned how to do anything but use his God-given talents. He needs to learn how to play the full game, not just speedy breakaways.

You watch scorers like Stamkos and see them, without the puck, drift into dangerous scoring areas. The puck will be in the corner or along the boards, and Stamkos will just slip into the high slot, with nobody paying attention to him. And sometimes the puck finds him, and the goalie has no chance to reposition and react.

When Lucic scored 30 goals in 2010-11, he did it by finding those dangerous areas before the puck found him. Seguin's skills are much more refined than Lucic's, so imagine how many goals Seguin could score if he figures out how to do this.

Seguin doesn't yet have the instinct or awareness to do this. He's never had to develop these aspects of his game. He's always been so much better than his opposition that sheer talent was enough to beat OHL and Swiss-A league players.

Speaking of his time in Switzerland, what motivated that decision? Money? "Atmosphere?" Why didn't he go to the KHL, the best league in Europe. Or up to Sweden or Finland? Why did he pick a league that isn't very good? He scored 25 goals in 29 games, but did he learn anything? He was -2 over there. Was he trying?

Seguin should try to learn from how David Krejci and Jaromir Jagr play along the boards. These guys aren't monsters, they're not known for their physical play, but they're so good at winning puck possession battles along the boards. These battles are like faceoffs against the glass, with no linesmen involved. Seguin doesn't do well in these battles. He doesn't seem to want to engage in them.

Maybe he's worried that he won't do well outside his comfort zone. Maybe he's so confident that he doesn't feel the need to adjust his game. I don't know, I'm not a psychologist.

I do know that Seguin is not as complete or well-rounded of an offensive player he could be. He's done well to learn Julien's defensive style of play. It's now time to learn how to play NHL offense. He doesn't have to be a power-forward, but he does have to go to the boards like Krejci. He doesn't have to be a pure goal-scorer like Stamkos. But he must diversify his game.

It might be too late to do that in this season. Next year must be a year of adjustment for Seguin.