NFL bust Ryan Leaf was busted on Saturday for burglary and possession of drugs. After posting a $76,000 bond, he waited only 2 days before being arrested for doing the same thing on Monday. He burglarized a home and stole prescription drugs.

It's just sad. And pathetic. He had an opportunity to live a dreamlife, but messed that up. Then instead of using the free degree he got from Washington State to build a normal life, he's taken to breaking into houses and stealing other people's prescriptions.

I'd feel bad for the guy, but he's had every opportunity in the world given to him. This latest example sums up his life nicely. He gets arrested Saturday, pays his bail, then commits the same crime on Monday. He was caught by the home's owner, then told the guy that he'd accidentally entered the wrong house and left. Once the owner of the house noticed he was missing some pills, he called the police.

You couldn't even scout the house and see when the owner typically comes home? With that lack of pregame preparation it's no wonder he failed in the NFL.

So you only need 3 great pitchers. The question with for the Sox rotation in 2012 is: can 2 or 3 be great enough to make up for the lack of quality in the others?

Maybe this is the year he steps up and becomes an Ace, but I think that is an unfair expectation. I think this is the year that he pitches like he's pitched for the last 4 years. He'll win 17 games, with an ERA around 3.40. A very fine, very respectable, quality year of work.

Josh Beckett is as unpredictable as Jon Lester is predictable. From game to game, year to year, Beckett is a gamble. He had a 2.89 ERA last year but only managed 13 wins in 31 starts. That was partly due to bad luck. 8 of his 11 no-decisions were Quality Starts.

The question with Beckett has never been "what's he capable of?" It's always been a question of consistency? Going into last September, he was 12-5 with a 2.54 ERA. He was 1-2 in September, with an ERA of 14.79. Which is the real Josh Beckett? They both are.

In 2012, I think Beckett will win at least 18 games. His ERA will be around 3.10. But he'll have some very bad starts, hopefully not at a time when his teammates need him to be his best. But as a whole, I actually am optimistic about his 2012 season. 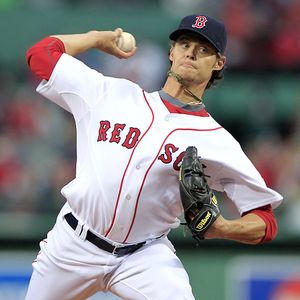 Clay Buchholz's health could determine if the Red Sox contend for the AL East, or struggle for the 2nd AL Wild Card. He emerged as a frontline starter in 2010, winning 17 games with a 2.33 ERA. Last year he struggled in April then settled down in May and June, going 5-0 with a 2.59 ERA in those months. And if he didn't get hurt, who knows how the season would have gone.

Back injuries worry me. And Buchholz' physique is far from burly. There's no way to tell how well he'll recover from his injuries. If he doesn't, the Sox have a void in a rotation that already has a few voids after him.

Why is Buchholz so important? Because the back-end of the Sox rotation is garbage.

That was a long time ago. He was 22 years old and just out of college. He was converted to a reliever in 2008 and did so well in that new role that it got him to the Majors by 2009. Walks killed him as a starter (he averaged more than one an inning) and he's dramatically improved in that area. Against MLB hitters, he walks 0.386 per inning.

That's one inning per appearance though, against hitters who hadn't yet seen his stuff. This Spring, he's struggled as a starter. 13 walks in 18.2 innings. And 17 hits.

As a reliever, he's been able to fool batters one time. As a starter, he's not fooling anyone and certainly not fooling them twice.

I don't expect him to finish the season as a member of the starting rotation. 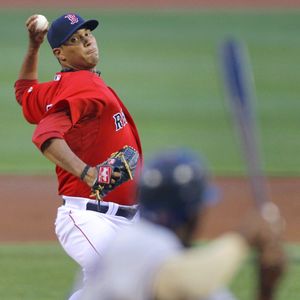 Felix Doubrant is having an unbelievable Spring. Which means a lot today, but will mean nothing on Thursday. He's bounced around the lower levels of the Sox' minor league system, occasionally excelling and occasionally disappointing. I'm not surprised the Sox are giving him a chance to be a starter, I'll be shocked if he's still in the rotation once summer starts.

Alfredo Aceves has much more starting experience than Bard. 108 minor league starts and 9 in the Majors. Aceves could be a serviceable 5th starter. An innings eater. He won't be horrible like John Lackey was last year. He'll give 5 or 6 innings of solid work a night, with an ERA hovering above 4.50. And that's not bad for a 5th starter.

But if he is the 4th starter, then that's scary.

Right now he's in the bullpen, but I think will wind up in the rotation very soon.

It's a chilling thought, but the savior of the Red Sox rotation might be Daisuke Matsuzaka. He might not be able to return until the middle of summer. And his contribution will be even less predictable than usual thanks to Tommy John surgery.

But if Lester pitches like Lester, Beckett pitches up to (or even close to) his potential, and Buchholz manages to stay healthy, Daisuke is not a bad 4th starter.

Unfortunately for the Sox, Daisuke needs a strong bullpen in order to succeed. And we'll discuss how unlikely that will be in the next preview post.
Posted by rob at 11:00 AM No comments:

Welker and the others were smart to make sure the guy mentioned that they don't need adult diapers. But I'm sure Welker will get plenty of shit for this. Then again, Depends are supposed to be able to handle shit.

This commercial reminded me of when NASCAR driver Mark Martin was sponsored by Viagra. I don't know if he needed it or not, but in either case, there's no way the FCC would allow a Viagra commercial with him trying out the product and seeing how well his racing gear still fit.
Posted by rob at 10:00 AM No comments: