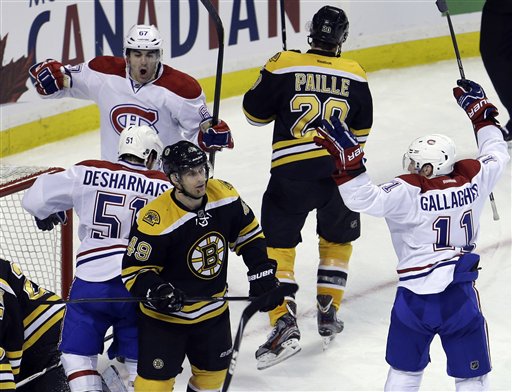 Whenever the Bruins play the Canadiens, the Bruins allow themselves to be surprised by Montreal's speed. They don't seem to give the Canadiens credit for being so fast. The simple fact is the Habs close down space much more quickly than anyone else. Five feet of passing lane is not a passing lane against them. It's a trap. When the Bruins lose to the Habs, they typically allow a goal or two from a turnover that was caused by not respecting Montreal's speed.

Speed is, however, almost all there is one can respect about Montreal (apart from goaltending). We witnessed more typical Montrealness last night: Alexei Emelin cross-checks Tyler Seguin in the ribs (and even breaks his stick doing so), and there's no call. Zdeno Chara sticks up for his injured teammate and gets 17 minutes in penalties. Emelin gets 5. And 0 for what he did to Seguin. We'll see if Brendan Shanahan's YouTube account has anything to say about Emelin's cross-check, but I doubt it. After all, how could cross-checking an opponent's best offensive player in the ribs be seen as "intent to injure?"

The Bruins lost Chara's services for 17 minutes and allowed 2 goals in that span. One of Montreal's goals was due to a screen that Chara could have cleared out. Another was a loose puck in the crease Chara could have knocked out.

I'm not blaming the refs. The Bruins made plenty of mistakes to deserve to lose this game. And refs are human. But you wonder why the NHL has injury problems, then you see Emelin do what he did and go unpunished, then Chara attempts to make Emelin pay, but it was Chara and the Bruins who paid the price.

That's why players like Matt Cooke collect regular paychecks and Marc Savard goes to therapy for depression. Because the NHL doesn't punish dirty play or dirty players, but it does punish retaliation for dirty play.

Oh and it wants to emphasize the enforcement of holding and interference. Apparently Seguin getting hit after giving up the puck wasn't interference either.

Anyway, tough stretch ahead for the Bruins. This condensed 48 game schedule is finally going to start to feel condensed. For the rest of the season, they only have one pair of back-to-back off days. Starting Tuesday in Washington they play 5 games in 8 days.