Celtics Are Grinders, 76ers Are Hoagies 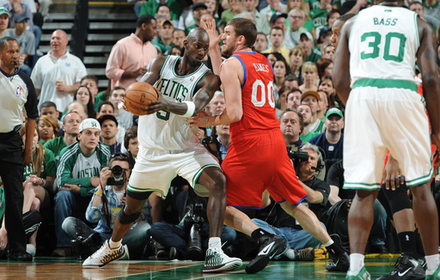 Not only does the word "grinder" aptly describe the Celtics and how they play, but it also irritates Philadelphians when you call a sub a grinder.

The moment that encapsulated the game was in the 4th when Avery Bradley blocked a Lou Williams layup, Rondo took the ball down the court, handed it off to KG, who made the layup and got fouled. Philly had an 84-83 lead with the ball with 3 minutes left. So instead of the Celtics trailing 83 to 86, they go up 86 to 84. A 5 point swing in one sequence.

After that, it was the Celtics' game to lose.

Kevin Garnett had another fantastic game on both sides of the ball. 29 points (9 in the 4th), 11 rebounds, and superb defense. The C's were behind for most of this game, but were able to stay close and eventually comeback because their defense contained the 76ers.

KG had help. Pierce had an off shooting night, but made all his free throws and finished with 14 points. He also had 6 assists, and 4 of those came in the 4th. Rondo had 13 points and 17 assists. As a team, the 76ers only managed 19. Bass had 10 points, Bradley had 8. Ray Allen scored 12 off the bench.

The Celtics didn't even shoot that well, and they won. They were 2/18 with their three-point attempts. And both teams shot exactly the same from the field (36/82, 43.9%).

When Pierce and Allen start hitting shots and dropping 20+ points, this could get very fun to watch.