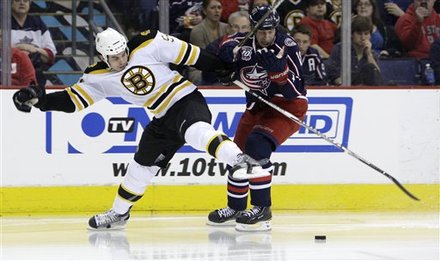 Even if the B's had dominated and won 7-0, I wouldn't be happy. This team has "turned it around" too many times in the past for me to invest any more faith in them. And ultimately, it's Columbus. Who gauges where a team is at by its performance in Columbus?

Krejci technically got the Bruins on the board in the 2nd, but it was a point shot by Chara, set-up by Lucic winning a battle along the boards. The deflection was actually due to Krejci being boxed out of the crease, losing a battle, but finding himself "guided" by a Blue Jacket to the right place at the right time.

The second Bruins goal was from Peverley, who's played solidly since arriving, but has yet to properly demonstrate his skills. I think that's because he hasn't been lined up with a very talented supporting cast. Sort of like putting Edward Norton in a serious cop movie, but casting him alongside Jimmy Fallon and Charles Barkley.

The problem is, who would Peverley play with? Bergeron and Marchand are mired in slumps. The 4th line hasn't scored since Marchand left it (I actually think Marchand should return to them and focus on playing, not scoring. The goals will then come). I actually wouldn't mind seeing Peverly centering the 1st line with Lucic and Horton, because he can score, and Krejci cannot.

Anyway, the offense has to come from the defensemen for now.

And thank the hockey gods above, Michael Ryder was a healthy scratch. That's actually what Ryder means in the native tongue of Newfoundland. "He who is healthy, but unworthy of a roster spot."

In the end, though, Rask won this game with some acrobatics. His teammates occasionally bailed him out, but they also occasionally put him in bad situations. He got lost on Columbus' 2nd goal, but the play should have never happened. This team still struggles with breaking out of its own zone. Such a childish thing for an NHL team to struggle with.

Bruins visit another hockey hotbed on Thursday as they play the Predators in Nashville.