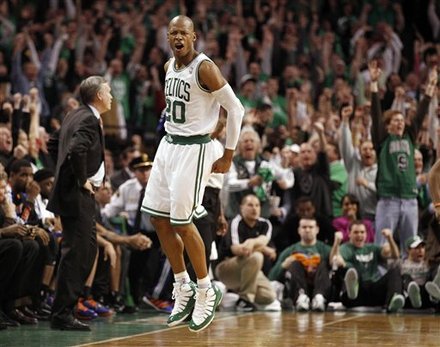 The Celtics played their game. They controlled the tempo, kept it a low scoring contest, and the clutch shooting of Ray Allen came through in the end. Give an assist to Doc Rivers' ability to draw up an inbounds play.

I'm still not overly enthused with the Celtics, as they're lack of an inside game was more than a little frustrating. It seems like all 5 c's stand around the arc, pass it to each other, hope for an open look, then hope the shot falls. That means Ray Allen's shooting percentage will dictate the result of the game. And nothing against Ray Ray, but it's not smart to rest everything on one man's shoulders. Then again, it does mean that one man can carry the team.

And Glen Davis needs to shut up. He's a backup talking trash about Amare Stoudemire's offensive play. Stoudemire might not play defense, but he averaged 25.3 points per game this year. Davis is lucky to see that many minutes. 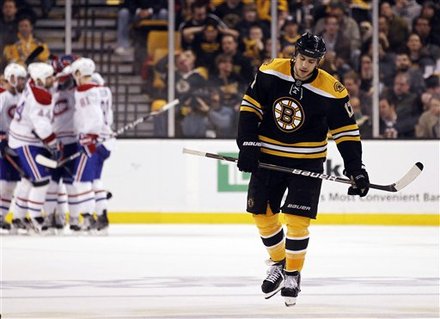 Fundamentals. Protecting the puck. Breaking out of your zone. Hard wraparounds. This stuff's not complicated. But to Claude Julien's Bruins, it's rocket science.

Every Montreal goal in this series has come thanks to a Bruins' defenseman giving the puck away in a dangerous area. Five times. And it's been a problem with this team, no matter who the defensemen have been, since Julien took over. I still have nightmares about Carolina's forecheck in the '09 playoffs.

The Bruins don't seem to realize that the Habs are trying to intercept the puck from them. Not only are the Canadiens skating faster than the Bruins, they're thinking faster.

On the other end of the ice, Recchi, Marchand, and Bergeron finally got one past Price. That's not too complicated either. Get him to move side to side, and block his vision. One thing you can't do is lazily dump the puck into an area that he can play it or smother it. Hard wraparounds, and cross-corner dumps. And someone apart from the dumper has to be skating into the zone with speed. Too many Bruins' possessions ended with soft dumps that Price easily fielded. 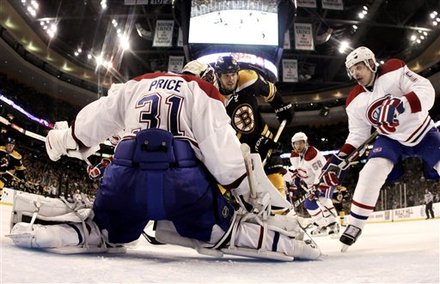 And the power play. Special teams are extremely important in the postseason, and are often the difference between losing a series and winning it. The B's are 0/7 on the power play, 6/7 on the kill. Had Chara been on the ice Saturday night, maybe they'd be 7/7 on the kill. I'll get into that later.

David Krejci is not a playoff forward. He's not a scorer. He's not a grinder. He had a golden chance to slip a backhander over Price in the 2nd, which would have made it a 2-2 game, and would have swung all the momentum to Boston's side. But he dangled, whiffed, and was generously rewarded with a shot on goal in the box score. Krejci also found himself completely owned by P.K. Subban on the boards (unless Subban was trying to induce a call). Krejci can't score. He can't win battles. There aren't any great point-guard, "distribution" type players in Stanley Cup history. Those players get 50 assists in the regular season, then disappear in the playoffs.

At least Krejci is trying, though. Where was Milan Lucic? I saw him drifting around the faceoff dots as Krejci was struggling behind the net. Lucic has become the Bruins' best scorer, but he needs to remember his physical roots. He shouldn't be trying to slip into a seem while Krejci's 178 pound frame is being manhandled. Lucic has been a ghost this series. That's okay for the Michael Ryders of the world, but Lucic is better than this.

Now to Chara. Getting medical information during the Stanley Cup playoffs isn't easy. All we know is that he has a virus, and he was dehydrated. He skated in warmups on Saturday, then the coaches decided to bench him, deeming him unable to play.

What's the virus? It better be serious. Because Chara is the heart of this team. He doesn't have a good playoff record. But without him, this team cannot win anything. He's my 2nd favorite player behind Thomas, but if I find out that he just has a touch of flu, I'll never forgive him. Nothing short of the Hantavirus will suffice.

The B's go up to Montreal tonight. Chara's still questionable. The Bruins play better on the road, but Montreal plays good with a lead. Whoever scores first will win Game 3. 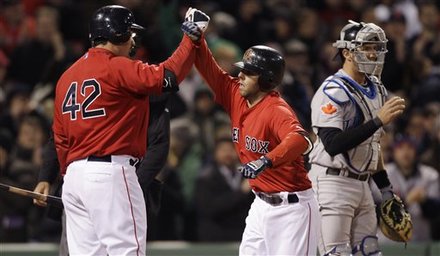 Winning becomes so easy when the starting pitcher does well. The pressure eases off the offense. The bullpen has less responsibility. All the hitters have to do is compile a few consecutive hits. It's really simple.

Josh Beckett looks pretty good. I'm still not sold on him yet, as he had brilliant starts in '09 and still finished with a decent but disappointing 3.86 ERA. So far, though, he's been excellent. His fastball is up to 95, and he's challenging hitters with it. The changeup is fooling batters, and the curveball is biting. He's getting strikeouts, and when hitters make contact, they get under or over the ball. That leads to pop ups and ground outs. It's once again fun to watch him pitch.

Lester had another Quality Start on Sunday. He was aided by some double plays, as he scattered 3 walks and 6 hits. He didn't give up the big hit though. It was his first win of the season, but his third straight Quality Start.

Buchholz has me worried. We all assumed that this 26 year old with 25 good starts under his belt was going to be a sure thing for 17-20 wins and an ERA under 3.00. We forgot who he was in '09 and '08. His confidence rises and falls with each start, and right now he's on a downswing.

The offense is still gradually getting better. I'm sick of seeing Crawford leading off games though. Lowrie is red hot and should be at leadoff until either he cools, or Crawford gets his average over .150.

It's funny/sad that taking 2 games from Toronto has become worthy of celebration.

Another tough lefty (how much do we miss Victor Martinez?) faces the Sox as Ricky Romero opposes Daisuke Matsuzaka at 11 AM today.