Tuukka Rask Gets Paid, But I Don't Like the Contract 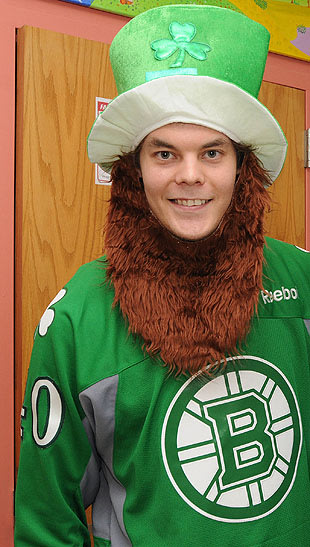 Two Us, two Ks, $56 million, eight years, too much, too long. It's going to be Tuukka Time in Boston until 2020-21. This deal makes him the highest paid goalie in the National Hockey League.

I think eight years is too long for a goalie who doesn't have an extensive track record. Rask has talent, and I want him to be the goaltender here, but he's only made 126 starts. This contract will keep him here for 656 games.

The Bruins have decided that Tuukka Rask will be the central reason for their success. Or failure. This team will now be forced to build around Rask. And I don't think he's earned that place. The amount of cap space they will use to pay him, for 8 years, is too much. He's a very good goalie, and on a team with more offensive talent he could win a Cup. But it's harder to acquire/keep that talent with such a huge cap hit. And in 2 years the Bruins are going to need to spend to either retain or rebuild their blue-line (Seidenberg has 1 year left, McQuaid has 2, Krug and Bartkowski are restricted free agents in a year, Hamilton in 2).

Rask is good enough to win, with help. He's not a carrier like Thomas was in '11, like Quick was in '12. He's more like Niemi in 2010, or a better version of Crawford this year. The Bruins are paying him like a carrier. And he hasn't yet played like a carrier in the playoffs.

Corey Crawford will make $2.7 million next year. The Blackhawks won a Cup because he was okay and his teammates were great. Jonathan Quick carried the Kings to a Cup and he makes $5.8 million, and will do so until 2023. Rask hasn't won a Cup as a starter, played only okay in the Cup Finals, and he's getting paid like a Conn Smythe winner. Why?

What has Rask done to merit the highest annual salary for a goalie (tied with Pekka Rinne) in the League, along with a contract nearly a decade long?

Tyler Seguin Needs to Learn How to Party AND Perform 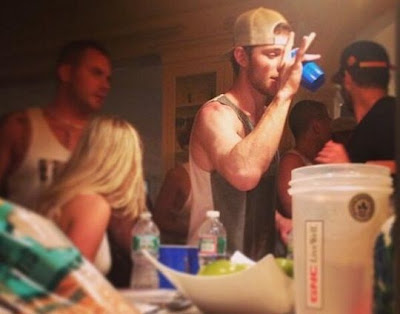 At his introduction to the (begin sarcasm) ravenous (end sarcasm) Dallas hockey media, Tyler Seguin was asked what it would be like to be part of a young team that was attempting to build itself up. It was a hockey question, not a question about his social life. But that's how Seguin answered it.

"There's a lot of young guys. On my last team, I was the only single guy."

Seguin then went on to talk about hockey again.

This is just a few days after the Stanley Cup finalists traded him away, and after his former GM talked about how he needed to get his act together, on and off the ice.

The reaction to Seguin's promiscuous social life is a bit harsh for my taste. It reminds me of Gronkowski. It seems like pundits and fans want these guys to live monastical, celibate lifestyles. Like Puritans, wearing drab dark clothes, only drinking a few ales with your teammates on off-days, waiting until marriage to engage in wanton acts of carnality. That's not going to happen. Nor should it.

Partying is fine. Almost every young athlete parties. And so would any of us. Look back to when you were 21. Now imagine you were paid millions of dollars and were famous.

You can perform on the field/ice/court while partying, too. Gronk performs on the field, when he's on it. And he got injured on an extra point, not on an extra pint. He got reinjured, again on the field, not in the bedroom having a sevensome with the Bryant University women's volleyball team. On the field he performs. He's already caught 38 touchdowns, and sets records at his position.

Then there's Patrick Kane, who is only 3 years older than Seguin, already has 2 rings, won the Conn Smythe, has an Olympic silver medal, and has established himself as a star in the NHL. He was a #1 overall pick in 2007, and he parties his ass off.

He scored 9 goals in the playoffs, 3 in the Finals. He performs.

Stevan Stamkos parties. Crosby parties. How many Russian players took a turn with Anna Kournikova? Remember when Tom Brady was banging Tara Reid? Then he and Bridget Moynihan got together. Then he finally settled down with Gisele. Shit, some people have pointed out that Brady and the Patriots won more when he was single.

All these guys go out and have fun. Except Tim Tebow and Peyton Manning. But even they probably go to county fairs and indulge with some cotton candy. And, of course, church.

What separates Seguin from Brady/Kane/Gronk is that those guys are able to perform AND party. Seguin is only able to party. The other guys have fun, then get down to business. They split their time. Seguin seems to want to party all the time.

He needs to realize that pussy is a renewable resource. It's not going to run out. There are going to be plenty of girls that will want him, even when he's a 40 year old with half his teeth making the NHL minimum. In 20 years he'll have the opportunity to sleep with girls that are only now being born.

In his current division he'll be able to go to Chicago and hang out with his buddy Kane. He can go to Denver and get some stoner girls. He can go to Minnesota and warm up with some University of Minnesota Golden Gopher girls. He can go to Nashville and hook up with some country singers. And in Dallas he can hang out with his new single teammates, as well as the Cowboys, and maybe even Manny Ramirez if he gets promoted to the Rangers. The opportunities to have fun are endless.

Why does Seguin party as if all the beertaps and vaginas in the world will dry up in the next 2 weeks? Why does he refuse to take a day off? Why did he spend more time guzzling Jagermeister, than skating around the Garden post-game with Jagr?

I think he has a confidence issue. He hasn't done what he's expected to do in the NHL. It's the first time in his life he hasn't met expectations, his own and everyone else's. So instead of facing that fact and working to improve, and also facing the possibility that he might fail, he's tried to master a different arena. He's king of all his parties. But on the ice he's a 3rd line winger that doesn't score. He can't fail at his social life. He's going to get drunk and get laid and be the envy of all his guy friends, who follow him around like bromosexual groupies. But on the ice, he is facing the possibility of failure for the first time in his life, and he's not confident enough to try to push through that.

Patrick Kane and Tyler Seguin are about the same size. Who plays more physically? Who plays less afraid? Who seems more confident?

Maybe having single teammates in Dallas will actually help Seguin. Maybe they'll point out that there's a time to have fun and a time to work. It'd probably be easier for Seguin to listen to that from other single hockey players, who love to go out as much as he does, as opposed to the older, married guys he was teammates with in Boston.

Or maybe he'll continue to party and not perform.

Like any job, nobody cares about your personal life so long as you show up and work well. Seguin hasn't done that. He hasn't performed. He hasn't demonstrated that he's putting in the effort to reach his potential. He can still party, but he has to figure out how to perform as well.

Anyway, it's not our problem in Boston anymore.
Posted by rob at 2:37 PM No comments: