Ray Lewis made a great point about the NFL and its over-reliance on rules. But his point was lost because he pissed Patriots fans off.

There are two topics that are guaranteed to piss off New England fans: SpyGate and the Tuck Rule. Start talking about these, even in passing, even as a joke, and Pats fans will flip out.

And I don't know why. I'm a Patriots fan, and I don't care about either topic. In 2001 the rules gave the Pats a break and bailed Brady out of a game-losing fumble. So what? The Raiders still allowed the game-tying and game-winning drives. The Patriots still beat the Steelers then the Rams. And yes, the Patriots filmed opposing signals from the sideline. So? If you're dumb enough to think doing so made any significant difference, then you should be mad at your own teams for either not noticing it and blowing the whistle on the Pats, or for not doing it themselves.

We in New England normally don't care what Ray Lewis says or thinks, it's just funny to hear him talk. Just imagine him dressed as Abraham Lincoln, with a beard and a stovepipe hat, giving the Gettysburg Address...

This is Robert E. Lee we're talking about, it's a chess game!

We all have a good laugh when Ray gets going.

But when he mentioned the Tuck Rule earlier this week, people in New England lost their minds.

In his recent remarks about how overly litigious the NFL has become, Lewis made the mistake of dwelling on the Tuck Rule. He argued that Tom Brady and the Patriots would be unknowns without the obscure rule. And he chose to do it the week after his former team was eliminated by the Pats. So his message was lost. Obscured, or obstructed, if you will.

And that's unfortunate because it was a good point. Rules were once meant to govern and control the game, now they define them. Rules used to focus on the clock and on formations and on player conduct and safety. People have been throwing and catching footballs long before rules existed to define when throws begin and end, when catches begin and end. But now the elemental parts of the game are being defined by rules. The basic parts that come together to make a game - throws, catches, tackles - are becoming complicated sequences of events. Dissecting a catch is like dissecting the Magic Bullet Theory in JFK. (fun fact: Arlen Specter, a nemesis of the NFL, came up with the Magic Bullet Theory when he was a junior prosecutor)

Throwing and catching are intuitive things. The NFL has turned them into complex, difficult to understand, even more difficult to explain concepts.

Football is something you're supposed to enjoy while relaxed, maybe even while having a few beers. You shouldn't need a philosopher and a lawyer in order to explain what a catch is to fans.

We don't need rules to define catches either. Rules for in and out of bounds are fine. Rules about clocks and formations are fine (although, not to John Harbaugh). Rules to define basic things that human beings have been doing for thousands of years? No, we don't need those.

So Ray Lewis was right. 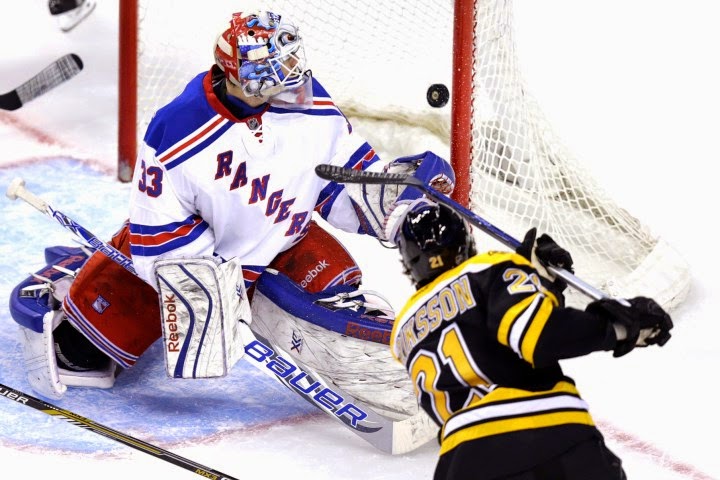 The Bruins were struggling 10 days ago, and I explained why. My explanation had nothing to do with Tyler Seguin. I made four main points:

The Bruins have won 5 straight since I wrote that post. Why? Well, their winning, just like their losing, has had nothing to do with Tyler Seguin.

Tuukka Rask is playing better. The saves he made early in Thursday night's 3-0 win over the Rangers were the types of saves you'd expect a $7 million goalie to make. He's doing his job.

Lucic has awoken from his slumber. He's skating, he's getting involved in the play, and the result is production: 3 goals and 6 points these last 5 games.

The B's have 4 fighting majors in the 5 game winning streak. That doesn't include the two times Zdeno Chara threw punches against Paquette and Tampa Bay. The Bruins had 15 fights in their first 40 games. They have 4 fights in their last 5, which is more than twice the pace. More fights and more wins. Coincidence?

And finally, while the Bruins still find themselves in cap jail, with Peter Chiarelli facing the death penalty, the emergence of David Pastrnak was like a call from the Governor, arriving the moment before the switch was flipped and the electric chair turned on. The 18-year old came back from the World Juniors red hot, and has scored 4 goals in the last 3 games.

During this streak, the B's have beaten teams like Tampa Bay (1st in the Eastern Conference), and Pittsburgh (3rd in the East). They've won their way into the playoff picture, leapfrogged the Rangers Thursday night by beating them, and now find themselves 7th in the East.

And somehow they've done this without Tyler Seguin. Speaking of whom, the B's host Columbus on Saturday, then travel to Dallas to play Seguin and the Stars on Tuesday.

Do Rajon Rondo and Tyler Seguin hang out in Dallas, and if so, why isn't a film crew documenting their shenanigans?

Photo Credit:
AP
Posted by rob at 1:46 PM No comments: