We all loved him a few years ago. He was a pest and a rat, but he was our pest and our rat. Our little ball of hate. Now he seems to annoy Bruins fans as much as he annoys the other team.

He's not just a talented antagonist, he's a talented player. He's got the skills and speed to be a top-6 forward, he plays both the power play and penalty kill. He's scored 20+ goals three times, and was on pace to score 33 in the lockout shortened 2012-13 season. He also has a knack for scoring shorthanded goals. He led the NHL with 5 this year.

In the 2011 Stanley Cup run he was amazing. In 25 games he scored 11 goals with 8 assists. His 10 even-strengthed goals were the most in the playoffs. He also had a shorthanded goal and was +12.

Since then, he's been a ghost in the playoffs. In his last 40 playoff games he's only managed to score 5 goals with 15 assists.

His career shooting percentage is 15.6% in the regular season. In the last 40 playoff games he's scored 5 times on 100 shots. The math is as easy as it is disappointing. When the games mean the most, he plays worse.

In 2012 against the Capitals, Marchand had a goal and an assist in Game 5. That was it. He was -1 in the series. The Bruins lost.

In 2013 he didn't score in the Toronto series but had 3 assists. He was good against the Rangers, scoring twice with 4 assists in 5 games. In Game 2 against the Penguins he scored a pair of goals. That was the last time he scored in a playoff game. June 3, 2013. He's failed to score in 19 consecutive postseason games.

He had 2 more assists in the Pittsburgh series. He did NOTHING against the Blackhawks and the Bruins lost. No points in 6 games with a -3. No points in the Red Wings series this year. He had 5 assists in the first three games of the Canadiens series, has done nothing since then.

In the last 19 playoff games he's scored 0 goals with 7 assists. Imagine how much more productive Patrice Bergeron would be if Marchand were playing better in those 19 games.

It's not just lack of offense, it's also poor decisions with the puck. He's helped opponents create scoring chances just as often as he's helped teammates, if not more so.

His former BFF Tyler Seguin was shipped out of Boston because of poor playoff performance, and because he didn't quite fit in with the "Bruins way." What's different about Marchand? The Bruins don't like his diving. His antics were once charming, now they're something to be embarrassed of. And his playoff production sucks.

The bottom line is, he's not producing as well as he's capable of. A guy who scored 25 goals in 82 games shouldn't be held to 5 goals in 40 playoff games. And if he is, he shouldn't become a defensive liability as well.

So if Marchand has another disappointing playoff performance tonight, and the Bruins lose and the off-season begins tomorrow, one of the first things the Bruins should do is get some packing foam and a big cardboard box to ship Marchand out of Boston.

If the Bruins Lose Game 7, We'll Only Have the Painful to Watch Red Sox to Entertain Us

It's mid-May. If the Bruins win Game 7 against Montreal Wednesday night, then we'll have at least two more weeks of playoff hockey to entertain us. Hopefully more. That would be fantastic because right now the Red Sox are almost too painful to watch.

They're 19-19 after losing to the Twins Tuesday night. With 124 games remaining, the Sox would need to play .629 baseball the rest of the way in order to equal last year's total of 97 wins.

The 8-6 loss to Minnesota Tuesday night is a perfect example of the difference between this year and last. Last year the Sox found ways to win such games. This year they find ways to lose them.

Jake Peavy allowed 6 runs in his 4.1 innings of work. The Twins did most of their damage in the 2nd. They were a triple shy of the cycle in the frame and they scored 5 times.

David Ortiz chipped away at the lead, hitting solo homeruns in the 1st and 4th, an RBI single in the 6th, and was part of a 3-run Sox rally in the 7th with another RBI single. The Sox tied the game at 6-6 in the 7th, although they also left the bases loaded. AJ Pierzynski struck out looking (which is odd for him). Pierzynski was 0 for 2 with RISP, he struck out 3 times, and grounded into a double play. My dislike for him is growing into hatred.

The Sox bullpen kept them in the game until Andrew Miller pitched the bottom of the 9th. With 2 outs Chris Parmelee hit a walk-off homerun.

So a bad start from Peavy. The Sox scored 6 runs but blew an opportunity to score a very important 7th run. And a reliever gave up a 2-run homer in the 9th. Just a perfect recipe for losing baseball. Each group of players found a way to lose.

Last year, when a starting pitcher failed to go 5, the bullpen saved him. When the 2013 Sox had the bases loaded with 2 outs in a 6-6 game in the 7th, they seemed to always get a hit. This year they have AJ Pierzynski being useless. Last year there were runners on base when Ortiz hit homeruns. Last year the Sox didn't have .232 hitting Grady Sizemore batting 5th.

I'm going to introduce something new to my Sox posts. It's a Blame Pie. A percentage of responsibility for each Red Sox loss will be attributed to players (and perhaps coaches). So here's the Blame Pie for Tuesday's 8-6 loss: 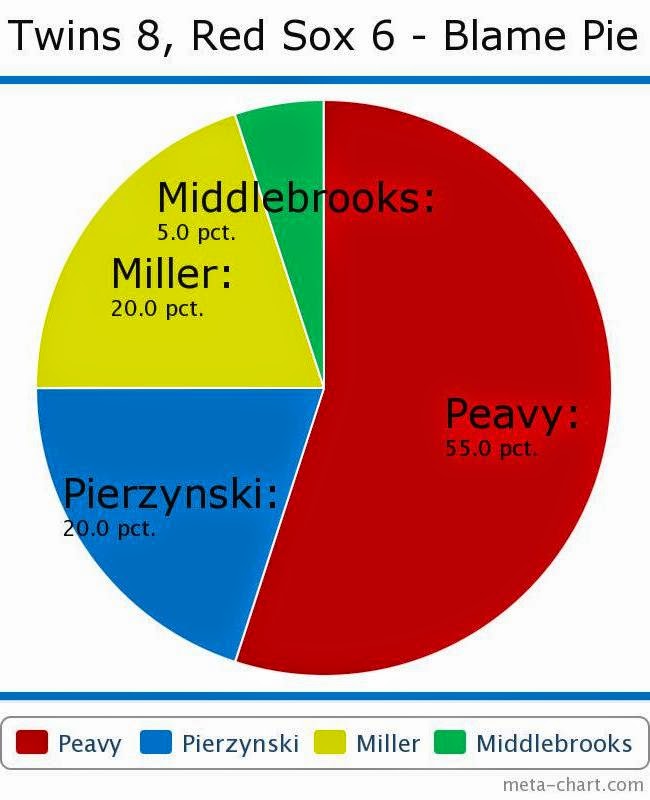 Photo Credit:
Craig Lassig/Associated Press
Posted by rob at 10:00 AM No comments: