Boston University will leave the America East Conference and join the Patriot League, effective on July 1, 2013. The men's and women's hockey teams will remain in the hockey-only Hockey East Conference.

BU has done well in America East recently. In the last 7 years, they've won 40 conference titles in 14 sports. Most notably, they won the America East basketball tournament in 2011.

The Patriot League is slightly more competitive than America East. It's also less New York/New England centric. BU will join Holy Cross as the only other New England member. Colgate and Army are in New York. Lehigh, Lafayette, and Bucknell are in Pennsylvania. American University is in Washington, DC. And the Naval Academy is in Maryland.

Fordham and Georgetown are football-only members of the Patriot League. Army and Navy are independents in Division I-A. American does not have a football team.

So maybe, just maybe, BU might consider playing football again. I know that's doubtful, and pure speculation on my part. But it'd be nice.

Anyway, BU is now in a broader-based conference. They'll be playing across the northeast. They're in a better basketball conference. Seems like a solid move.
Posted by rob at 1:10 PM No comments:

The Sox are in Chicago to face the Cubs. Which means it's time to talk about former Red Sox GM Theo Epstein.

Just about every media outlet in New England had a piece or an interview with Theo this week. And he said some interesting things about his time with the Sox. He mentioned pressure to spend money and acquire players, and constant pressure to keep the team successful.

I can appreciate that. And I can appreciate Theo not wanting to work under Larry "Il Duce" Lucchino and Lord John Henry. But I don't know if I appreciated Epstein's tone or the way he explained his tenure in Boston. I got the sense that he was trying to say that mistakes he made weren't his fault. That he knew what he was doing was unwise, but that he was giving in to organizational pressure.

Theo's moves won the Sox two World Series. So let's just state that right off the bat. He made the Nomar trade, he signed Ortiz, he traded for Beckett, all these moves (and more) helped the Sox win it all in 2004 and 2007.

He wasn't perfect. Nobody is. But some of the deals he made were silly. Especially when he spent lots of money. JD Drew. An injury prone John Lackey. Spending $51 million just to talk to Daisuke. Re-signing Beckett. Bobby Jenks. Giving Carl Crawford $142 million. The sizes of the contracts were what made the signings odd. Carl Crawford was a very good player with the Rays, but the size of the deal was beyond even his expectations. Nobody was bidding against the Sox when they signed him. They just threw a bunch of money at him.

So Epstein is saying that there was a desire to try to improve and to win every year, and that overwhelmed his patience. So he compromised his philosophy and would "settle for a different move that maybe doesn't check all the boxes."

If that's the case, it's still his responsibility. And what is he afraid of? He had two rings. He once quit the organization. And yet he felt pressured to compromise his philosophy? He didn't feel confident in the patience that won the World Series twice?

What I think actually happened was that he tried to be too clever with his big acquisitions. He was a disciple of Billy Beane. He used his brain to make some smart moves. He found undervalued talent like David Ortiz, Bill Mueller, Mark Bellhorn, and so on. He turned the farm system around and it's been producing since. He had the balls to trade Nomar. He was very good at being a non-traditional GM.

But the traditional, big money stuff is different. It's simple. It doesn't require extraordinary intelligence. For example, the Yankees wanted CC Sabathia. He's a great pitcher, so they gave him lots of money. It's not brain surgery.

But he tried to be clever and different in this area too.

He always saw Julio Lugo as a guy capable of becoming a superstar. So even though he had never had his breakout season, Theo paid him close to $9 million. Because Theo thought if he had that breakout year, then $9 million would be a bargain. He never broke out.

People shied away from JD Drew because of injury and attitude problems. But Theo saw the injury history and his logic told him that Drew would be one of the best in the game if he weren't so unlucky with injuries. So he gave an injury prone player a 5 year deal worth $70M. Drew missed an average of 40 games per season.

Everyone was excited about Daisuke, but none more than Theo and the Sox. The Sox bid $11 million more than any team just to talk to Matsuzaka. Theo and the Sox thought they were smart enough to handle all the adjustments to pitching in the Majors, to a 5 man rotation, to pitch counts. Daisuke was supposed to reinvent pitching, and the Sox were going to help him do that. The results have been mixed with him.

Theo placed so much importance on value, but then he'd overpay for the guys he wanted to get. He's also hesitate to re-sign aging players with injury concerns. Then they sign Lackey and pay him over $16 million. They worry about age and health, then sign a 31 year old pitcher with a bad elbow. 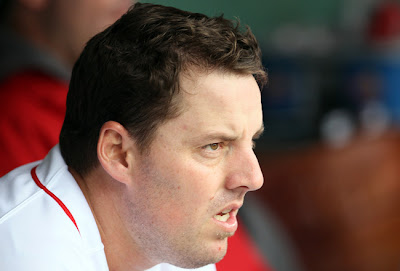 Epstein did a lot for the Sox. For every Edgar Renteria there was a Keith Foulke and a Curt Schilling. For every JD Drew there's a Papelbon, a Lester, a Buchholz, et cetera.

It doesn't take a sharp baseball mind to see that Felix Hernandez is a good pitcher. And that Miguel Cabrera is a good hitter. The biggest acquisitions require the smallest amount of thought and analysis.

But Theo never turned his brain off. He's claiming now that he ignored it, but the problem was that whole he was here, he was using it too much.
Posted by rob at 12:40 PM No comments: