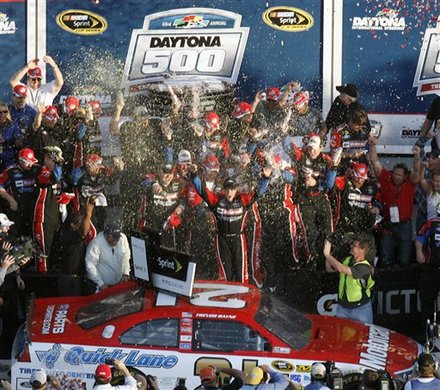 What were you doing the day after you turned 20? I was probably nursing a hangover and eating Thanksgiving leftovers. The day after Trevor Bayne turned 20, he won the Daytona 500, and pocketed $1.46 million for doing so.

The race was long, with a very boring stretch in the middle. 16 cautions slowed the pace. Most of the race featured 4 to 8 cars out in front, casually swapping the lead, and a pack of 20 cars half a mile behind them jockeying for position. Every now and then, a random wreck would eliminate a few contenders.

In the last 10 laps, things got exciting, as the casual lead swapping turned into something a bit more competitive. Bayne was able to get to the front and stay there, blocking two cars down the stretch.

It was cool to see Bayne's excitement. He didn't know what to do to celebrate, got lost driving to victory lane, and he's not even going to be a full time Sprint Cup driver this year. He'll be in the Nationwide Series (NASCAR's equivalent to AAA), driving for Roush-Fenway.


And I probably won't watch a full race until March 20, when NASCAR visits the high-banked short track in Bristol, Tennessee.

THE NEW SHAPE OF THE BRUINS 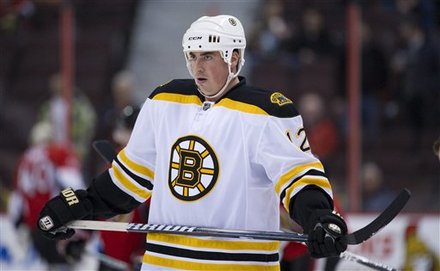 Between Nassau, NY and Ottawa, ONT, the Bruins changed quite a bit. They added a center and two defensemen. They lost a defenseman, a winger, and some draft picks. They've completely changed their Power Play unit, and now have an abundance of centers.

The big move was acquiring Tomas Kaberle for the 1st round pick from the Kessel deal. Kaberle is 5th among NHL defensemen with 35 assists, 22 of which have come on the Power Play (2nd among NHL defensemen in that category. Lidstrom has 23). He is the long sought after "puck moving" defenseman. In other words, he's not a screw-up when it comes to making plays with the puck. Not just the impressive, goal-scoring plays with a man advantage, but the simple neutral zone plays that the Bruins frequently struggle with.

Overshadowed by all this was the deal that sent Blake Wheeler and Mark Stuart to Atlanta, and brought Rich Peverley and Boris Valabik to Boston. Valabik is a tall (6' 7"), 25 year old Slovakian prospect, and will probably not dress for the big club.

But Peverley will play. He scored 22 goals last year, and he's scored 14 this season. That's 5 more than David Krejci. Peverley will compete with Kelly and Campbell for the 3rd and 4th line center spots. While Kelly brings "solid" play with good defense, and Campbell brings grit, Peverley brings a bit more flare.

The Bruins now have 6 centers for 4 spots. Seguin will probably not play center if he dresses. Krejci and Bergeron are #1 and #2 on the depth chart. Adding both Peverley and Kelly gives the Bruins some options, and some insurance.

The great thing about the Kelly and Paverley deals is that they didn't cost much. Kelly was acquired for a 2nd round pick. And for Paverley, the Bruins gave up a superfluous (word of the day, it means "being more than is necessary") defenseman who'd been scratched a few times (Stuart), and a winger who was doing nothing but occupying a roster spot (Wheeler). So for a modest price, the Bruins now have some decent flexibility for the 3rd and 4th center spots.

The Kaberle deal was a bit more pricey. He's an unrestricted free agent, and the Bruins' cap situation is hardly comfortable. So to give up a top 1st round pick for him is a steep price.

The power play is better. And the Bruins now have more role playing forwards. While the team is much improved, I still think the core isn't as strong as the elite teams in the NHL. There are simply too many "he can score 20 goals and play well on the penalty kill" guys on this team. There aren't enough "he changes the complexion of a game when he's on the ice" type of players. Lucic is a core guy. So is Bergeron. Same with Chara, Thomas, and now Kaberle. I'll say Marchand is, as well.

This team depends too much on the likes of Nathan Horton and Michael Ryder to get hot and score goals. They depend on Tim Thomas to be a freak of nature, and on Zdeno Chara to play 25 minutes a night, shutting down the opposition's top line. And while you can lean on the likes of Chara and Thomas, you can't depend on guys like Horton and Ryder.

If the Bruins were a tree, I'd say the trunk isn't yet strong enough. And some of the branches flap a bit too much in the breeze. But the real problem lies under the surface, in the roots. And by that, I mean Claude Julien. It was nice watching Kaberle play freely against Ottawa, before Julien had taught his overly sequential, A-B-C style to him. Before Julien could overcoach his skilled and creative player.

Julien has hamstrung this team long enough. After the Bruins are eliminated in the 2nd round of this year's playoffs, it will be time to eliminate him.