Technically, there are 5 New England teams. But Albany, NY is more New England than New Haven, CT; so screw Yale.

Boston University is the #1 overall seed.

Here are the regions and the pairings:

Prediction:
BU should roll over Ohio State. New Hampshire is essentially playing on home ice against a North Dakota team that's a long way from home. UNH actually beat BU back in October, but the Terriers have improved exponentially since then. BU goes to the Frozen Four from the Northeast.

Prediction:
Jordan Pearce - Notre Dame's goalie - is sick. I saw him back when they visited/dominated Boston College in November. He'll carry them very deep into this tournament.

Northeastern vs. Cornell is a tough matchup for both teams. Northeastern is cold, losing to UMass-Lowell, BC, and UMass-Amherst in the past few weeks. Cornell's Big Red are far from red hot, but Northeastern's struggled in big games this year. Then again, Cornell has been horrible away from Ithaca, so I give the edge to Northeastern.

Whoever wins Northeastern/Cornell, Gary Glitter's "Rock and Roll Part 2" will get played to death, and Notre Dame will beat the winner.

Michigan gets the #1 seed, but they have to play in Yale's backyard. Big Blue will crush the boys in Air Force blue, and Yale will roll over a sputtering Vermont side. Yale's only lost three times at home and they won the very tough ECAC (regular season and tournament). Yale comes out of the East Region.

Teams I know next to nothing about. Except this: Denver is good. Denver is really good. The Pioneers (that's Denver) move on to the Frozen Four.

Who wins it all? 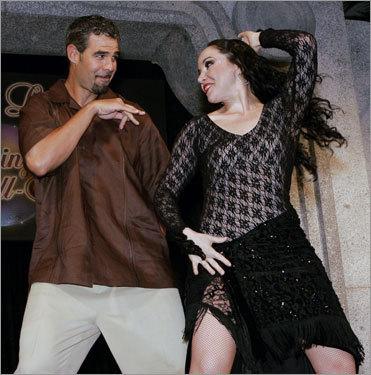 He's only played a few Spring games, but he's looked solid and healthy in them. It will be interesting to see how well his hips absorb the daily wear and tear of playing third base and batting 5 times a night.

Jed Lowrie was supposed to be the backup for Lowell (after Youkilis, of course), but with Lugo needing surgery he might not be able to for a bit of time.

If Lowell is healthy and productive, even at the same level he was last year, the Sox have a solid anchor at the bottom of the lineup. If not, they have yet another hole, and the lineup starts looking very suspect.
Posted by rob at 11:00 AM No comments: