From across the country, NFL players rallied around the four Saints that were suspended yesterday. The players felt as though Vilma, Hargrove, Smith, and Fujita were being punished for "playing football." That trying to hurt an opponent was "part of the game."

That's what the players and some fans don't seem to get. The NFL is trying to get rid of that part of the game.

The scandalous part of this scandal was the money. Pay-to-injure. The Saints coaches and players like Vilma paid cash to players for injuring opponents. Which is a salary cap violation. And it also goes against what the NFL has been trying to do in order to limit injuries.

The NFL wants to protect their investment. They invest in the players and invest in the game. The League wants the game to be as hard-hitting and as safe as possible. It's a tenuous balancing act. The NHL is struggling with a similar problem. The NHL wants the game to be as fast and physical as possible, but they don't want to see players carted off the ice with their heads in neckboards. Both leagues want the game exciting so fans watch, but not so violent that they turn away.

Vilma, Hargrove, Smith, and Fujita helped Gregg Williams and Sean Payton set up this bounty program. And before this off-season, such a program might have seemed to be part of the way football has always been played.

But it isn't how the game will be played anymore.

The Sox are hungry for pitching. So why not take a shot at Mark Prior? He signed a minor league deal and will go down to Fort Myers to pitch in extended spring training. After he builds some arm strength, he'll likely be assigned to a minor league team.

But he hasn't thrown a pitch in the Majors since 2006. Last year the Yankees gave him a shot, but it didn't work out. Before that the Tigers and Padres rolled the dice, lost, and moved on.

Prior's career has been plagued by injuries. His mechanics have been cited by some as the root cause of those injuries.

The guy once had it. The odds of him being a successful Major Leaguer are slim. But why not take the shot? The Sox aren't loaded with relief pitchers at the moment. So roll the dice.
Posted by rob at 1:00 PM No comments:

When the Redskins let go of Jabar Gaffney, part of me thought that the Patriots might sign him. He was once a solid 3rd option for the Patriots (behind Moss and Welker), and had done well for the Broncos and even better for the Redskins.

Then I said to myself "the Patriots already have a packed stable of WRs. They won't sign Gaffney."

But the Patriots did sign him. And now that I've been able to think more about it, it makes sense.

The Patriots have Chad Ochocinco, Deion Branch, Brandon Lloyd, Anthony Gonzalez, Julian Edelman and Donte Stallworth. Wes Welker's status is still unknown, but you know the Patriots want to keep him. Gaffney is the 8th receiver to the party, but he's not the 8th in line. Matthew Slater is listed as a receiver, but his true value is on Special Teams. Still, 8 WRs on a team with a pair of tight-ends that combined for 169 catches is a bit weird. Brady threw 611 passes last year. There's only so many passes to go around.

But Gaffney is stability. He's the known variable. Look at the other guys. Most have a question mark. Ochocinco doesn't understand the playbook. Branch will be 33 when the season starts. Gonzalez hasn't caught a pass since 2010 and he only caught 5 that year. Edelman caught 4 passes last year. Stallworth only caught 22 passes last year and hasn't been the same since 2007 with the Pats.

Gaffney is pretty good. He caught 68 passes for 947 yards last year. He's a guy that Josh McDaniels likes to worth with, and worked under him in New England and Denver. You know what you're getting with Gaffney.

If you had to put 5 eligible receivers on the field for the Patriots, it'd be Gronkowski, Hernandez, Welker, Gaffney, and either Lloyd or Branch. And that's why the Patriots sign him.

Gaffney is the #2 receiver on this team behind Welker. He can run deep routes, go across the middle, and he doesn't whine when someone else gets the ball more than him. He works well in McDaniels' system.

This Patriots' off-season is getting ridiculous.
Posted by rob at 12:00 PM No comments:

Pekka Rinne was huge in this game. It was close to a must-win for Nashville. The Preds were also without Alex Radulov and Andrei Kostitsyn. The team suspended them for a violation of team rules over the weekend. Rumor has it they broke curfew with a night out on the town. The disciplining seemed to work. I wouldn't be stunned if one or both of these guys didn't dress for Game 4.

Game 4 is Friday night in Nashville.

Rangers' defenseman Ryan McDonagh had 53:17 of ice-time. There were 95 total shots on goal. There were 81 blocked shots. Marc Staal played 63 shifts. This was a grind of a grind. Neither goalie gave an inch. Gaborik scored the game-winner thanks to some excellent play along the boards. Anyone who watched this game understands why the Stanley Cup Playoffs are the best postseason in all of sports. Even Boomer Esiason tweeted: "One of the greatest hockey games I've ever witnessed. #NYR and #Caps show why hockey playoffs are the absolute best." 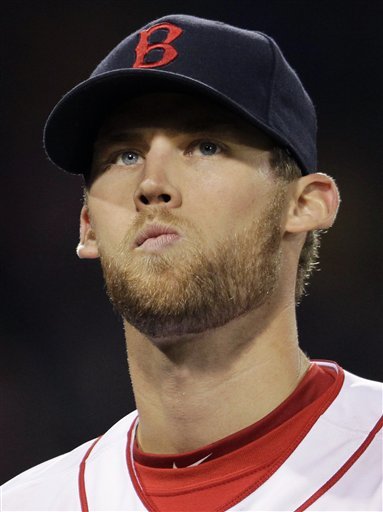 The Sox went 0 for 13 with runners in scoring position. They lost a series in Fenway to the A's for the first time since 2006.

Will Middlebrooks made his MLB debut and did well. He was 2 for 3 with a walk, a double, and stole a base.

The Sox got their share of baserunners. Brandon McCarthy has given up a lot of hits in each of his starts. But the Sox never got timely hits with runners in scoring position.

It's an inconsistent lineup. The Sox scored 16 runs in this series. That's 5.3 per game. Not bad. But 11 of those runs came in one game. The Sox only managed 5 total runs in the other two. This series has been a trend for the Sox all season long. It's either feast or famine. It's either 3 runs or less, or 9+ runs.

To be fair, Ellsbury and Youkilis are out. That hurts the lineup. Ross, Saltalamacchia, Sweeney, and Aviles have all contributed to the offense, but they shouldn't be relied on to regularly produce. These guys went 0 for 6 with runners in scoring position last night.

Guys like Adrian Gonzalez, though, should be counted on to produce.