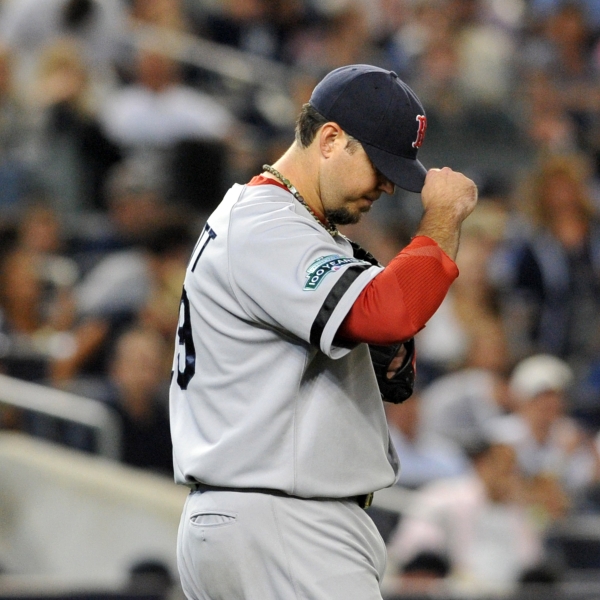 Josh Beckett remains tied with Daniel Bard at 5 wins. Beckett is so bad that last night's 6 inning, 4 earned run start seemed like a gem, at least for him. But it wasn't. It was typical Josh Beckett.

Beckett is capable of making great pitches. And he makes lots of great pitches. He struck out 6 Yankees last night, and made Robinson Cano look like a fool twice. But he doesn't make great pitches enough. And too often, he makes very bad pitches. Those mistakes/misses undermine his entire outing.

The cut fastball to Curtis Granderson in the 1st, for instance, was higher and caught more of the plate than Beckett and Lavarnway had intended. Granderson hit an RBI double. Then the pitch he left up to Ichiro which resulted in a homerun. Beckett got away with a fastball down the middle to Eric Chavez with the bases loaded in the 5th. Chavez popped out to first. Beckett made lots of great pitches last night, but his performance was defined by his poor pitches.

Beckett's career has been like this. He's capable of brilliance. He just isn't consistent. It's like cheating on a diet. You get up at 5:00am, run a few miles, have a plain bagel for breakfast, chicken salad for lunch, stir-fried veggies for dinner, then at midnight you go to Wendy's and get a triple Baconator meal. One slip ruins the entire day of diet and exercise. That's how Beckett pitches.

I don't know why Beckett is inconsistent. I can (and will) speculate. He doesn't seem too worried about being the best he can be. He gets by on talent, and that's gotten him 2 rings and a $17M/year contract, so why not? He isn't interested in his teammates, unless they're his drinking buddies. He doesn't take care of himself. He's enjoying life as he is, so why try to improve?

Fuck Josh Beckett. He's a loser, on the field and off it.

This team ends a 10 game road-trip with a 4-6 record. They're 4 games under .500 and 8 games out of the Wild Card in the loss column. And Josh Beckett is the person most at fault for this.

The Sox start a 7 game homestand on Tuesday against the Angels. The OC Angels are one of the teams the Sox would have to leapfrog to claim a Wild Card spot. This is yet another opportunity for this team to help themselves. They tend to not take advantage of such opportunities.

Aaron Cook faces Ervin Santana, who has had a rough year, but has pitched well in August.