A ball bounced off Miroslav Klose's hand and into the net, apparently giving SS Lazio a 1-0 lead over Napoli. But Klose appealed to the officials, told them that he struck the ball with his hand, and the goal was disallowed. Napoli eventually won 3-0.

You won't often find greater shows of sportsmanship and integrity than this one.

That being said, I'm a fan of Germany. And if Miroslav Klose had done that in a big elimination match against the Spaniards or Dutch, I'd kill him. 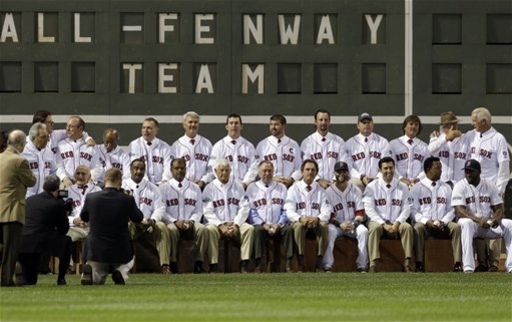 The last home game of the 2012 season ended with the commemoration of the "All Fenway Team." In other words, the best Red Sox players since 1912. Cy Young need not apply.

But some of the results pissed me off, and sent me in a rage worthy of a 1934 style drinking binge.

But before that, let me express my appreciation for Jimmie Foxx being named the 1st team 1st baseman. Foxx is the best player in MLB history to not have his number retired, thanks to the Oakland Athletics' policy to not respect their history in Philadelphia or K.C.

Dustin Pedroia was the 1st team 2B. OVER a Hall of Famer named Bobby Doerr. Doerr owns one of those numbers immortalized on the right field facade. Doerr>Pedroia, by any measurement. Talk to me when Dustin's career is nearing an end.

Fred Lynn was the 1st team center-fielder. Over Tris Speaker. Tris Speaker is one of the best CFs in MLB history. Speaker has a career average of .345. He was inducted into the Hall of Fame in 1937. He has the record for most outfield assists. As an outfielder he was a part of 139 double plays in his career, the most all-time.

But Fred Lynn is ahead of Speaker on this list.

And Dwight Evans was the #1 right-fielder. Then Trot Nixon the #2 at that spot. George Herman "Babe" Ruth was the reserve choice. Are you kidding me?

And yet Dwight Evans, then Trot Nixon are ahead of him?

One thing fans got right was Pedro Nartinez as SP and Terry Francona as Manager.

And you know what, Roger Clemens isn't a bad option for the mound after that. Give credit to Mr. Clemens for coming back to where he's despised. He was an important part of Sox history. And chemicals helped resurrect his career after Boston.

Super Mario on a Rampage 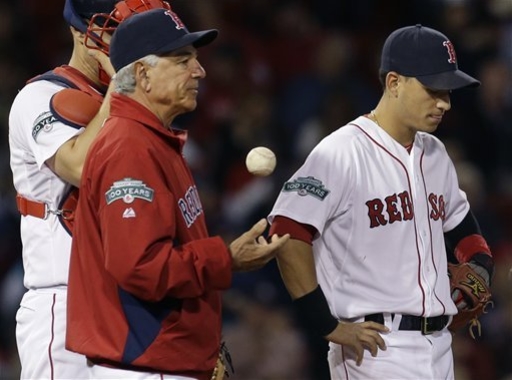 Maybe Liverpool FC should schedule some games at Fenway Park in October. Or perhaps Boston College could play a football game there. Otherwise, Fenway will be dormant in October, once again.

Jon Lester lost his 14th game of the year last night. He wasn't awful, but once again he simply wasn't very good. 6 innings, 4 hits, 3 runs. To be honest I didn't watch most of the game. I got to the bar and all the TVs were on baseball, but not on NESN. The Phillies/Nationals game was on two TVs, on two stations (ESPN2 and MLB Network). I had to request the Sox game be put on. That's the state of baseball in Boston.

Anyway, Lester wasn't very good and a JV lineup only managed 2 runs of support. There goes Bobby Valentine's plans to get Lester to .500.

No more games at Fenway and thank God. The Sox were 34-47 at home this season, which is utterly shameful.

Bobby Valentine actually thinks he'll be back next year:

"My gut feeling is they haven't talked to me yet. There hasn't been any dialogue. We've talked, but not about that. Which makes me think I'm coming back. I don't know."

Yeah, if he's coming back, I won't be. I'll just ignore baseball for an entire season, follow cricket or something, and return once this joke has reached its punchline.

NFL Referee Lockout Is Over 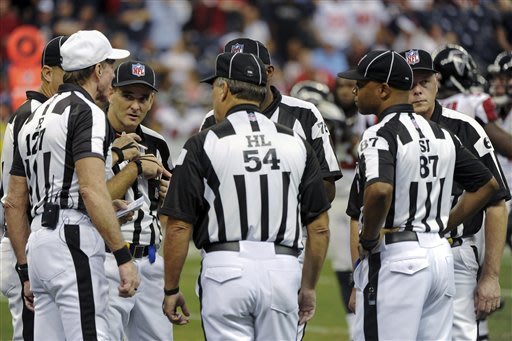 I think the last time I wrote something so happily was when the Bruins hoisted the Stanley Cup in early summer of 2011. The NFL Referee lockout is over! The real refs could return as early as tonight as the Baltimore Ravens face the Cleveland Browns.

And never again will officials be cheered so heartily, and welcomed with such warmth.

All I've been able to find out about the terms of the deal is that the refs agreed to an 8 year CBA, so I have no idea how much the NFL caved about the pension or anything else. And maybe that's how both parties want it the terms to be.

All I care about is that the men who know how to run an NFL football game will be running it. They won't be perfect. They'll make mistakes. But those mistakes will be minimalized in effect. Mistakes should be egregious exceptions to the norm, not normality, and not to be expected. Which they were the replacements.

And I'm sure the sideline decor of coaches and coordinators will improve. So too will the behavior of defensive backs in coverage, and offensive lineman in pass-blocking.

The sheriffs are back in town.

I would love to give Ed Hochuli a hearty handshake, even if he'd crush all the bones in my fingers.