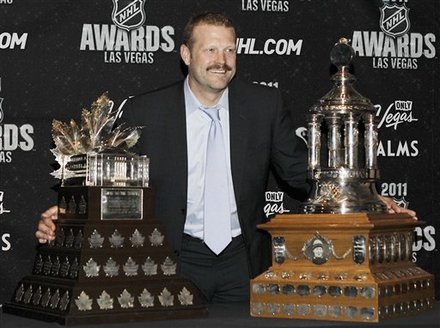 Not surprisingly, Timmy Thomas won his second Vezina Trophy, becoming only the 5th goalie to claim the honor more than once since they started awarding it in 1982. Patrick Roy, Ed Belfour, Dominek Hasek, and Martin Brodeur are the other multiple winners. Not bad company to be among. What's kind of a sad surprise is that Thomas was the top selection on only 17 of 30 ballots, meaning 13 people felt like someone had a better season than him. I'm guessing many of those votes went to Luongo. And that's really too bad.

Zdeno Chara didn't win the Norris for best defenseman. That went to perennial winner Nicklas Lidstrom for the 7th time. It's hard to argue against Lidstrom, especially since he's nearing the end of an illustrious career. I personally think Chara's ability to shutdown the top line of an opponent while simultaneously leading the NHL in +/- warrants the award, but maybe next year. And ultimately, Lidstrom has defined that position for this generation of players. It's tough to argue against him being awarded anything. 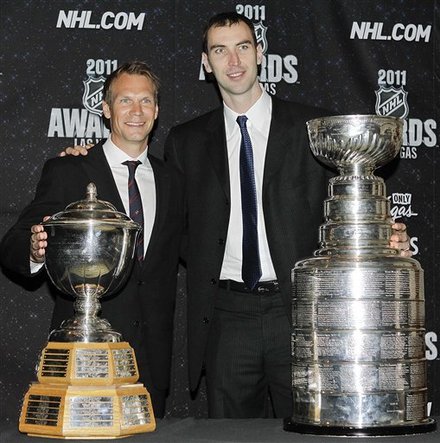 Chara did take home the Mark Messier Award for Leadership. And that's appropriate. I think Chara proved in the playoffs that he's become a leader. Last year, he struggled to perform in the postseason. This year, he rallied his team, most notable after Horton went down, and led with his words and his deeds.

What pleased me most was that Daniel Sedin didn't win the Hart Trophy for MVP. Corey Perry of the Ducks won that. While I would've given it to Thomas, I'd rather see Perry win it than any other skater. Perry was THE guy on the Ducks, and led them to the playoffs. Sedin was one of many pieces to Vancouver's regular season dominance. It's tough to give an MVP to a guy who literally has a duplicate on his team.

So it's nice to see that Vancouver gets some trophies anyway. Although I wonder if they'll destroy half their downtown area because Sedin didn't take home the Hart.
Posted by rob at 2:22 PM No comments: