Inconsistency and individual mistakes. I think Al Capone summarizes my thoughts and feelings on some of the individuality shown by some Bruins at some times. Not that they were out for themselves, they just thought they could do too much on their own.

The Bruins weren't ready to win this year. They had all the tools, but minimal experience and zero wisdom to properly utilize those tools. In the regular season, talent and hard work are enough to get you 100 points and be an elite team. In the playoffs, it's different. You need to dramatically minimize the damage of your own mistakes, and maximize the damage of your opponents mistakes.

How many breakaway goals did Carolina score in this series? How many did the Bruins score?

One of the Bruins' biggest regular season strengths was their power play. It became a weakness in this series. They were 2 for 27 with a man advantage. That's 7.4%. That's after logging the 4th best PP production in the regular season at 23.6%. When you include Carolina's shorthanded goal in Game 2, the B's power play looks even weaker.

Things like this are fixed by the players themselves. There's no moves that need to be made to correct the power play. It simply needs to be executed better. In the opening games of the series, the Bruins threw all their PP tricks at Carolina, and the Hurricanes answered. When Zdeno and Wideman shot from the point, the Canes blocked the shots. When the B's dumped the puck into the zone, Cam Ward played it (that happened far too many times in this series).

The Bruins were lost on the power play, and on offense in general. And it was offense that cost them this series. Tim Thomas and his playoff leading GAA tell us that. They got too fancy on breakaways, often not even getting a shot off. They vacated the crease much too often, not capitalizing on rebounds and deflections.

But they will learn, and they are learning. In retrospect, did we really think a team of kids would win the Cup? The leading goal scorer - Phil Kessel - is 21. Milan Lucic is 20. David Krejci is 23. Blake Wheeler is 22. Chuck Kobasew is 27. Mark Stuart is 25. Dennis Wideman is 26. Byron Bitz is 24. Patrice Bergeron is 23!!! It seems like he's been around forever. 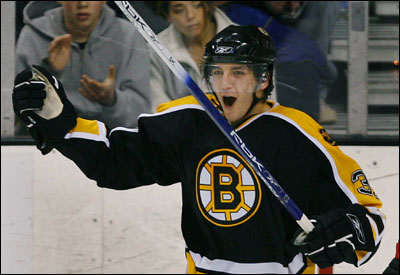 This isn't a one and done team. And no key players are unrestricted free agents. Kessel and Krejci are both restricted free agents, as is Bitz. But the depth of this team is so outstanding, that even losing one of these promising forwards won't be the end of the world. Mark Recchi will be gone, but Marco Sturm will be back.

How good will Byron Bitz be as a full time player in 09-10? How about Matt Hunwick? Lucic is only going to get better and better. Bergeron has become an excellent defensive player and penalty killer. The Providence Bruins are in the AHL final four. Tuukka Rask will be the best backup goalie in the NHL next year.

This season can be deemed a failure, and that's understandable. I'd certainly say that an exit like this for a team as talented as the Bruins merits an F. But this team's going to be motivated next year. For many of them, they tripled their total playoff experience this year. They're going to be focused.

I've got some friends who live in Vegas. When the odds come out for the 2010 Cup, I'm putting $500 on the Bruins to win the whole damn thing.

IT HAD TO BE SCOTT WALKER?

We all know Scott Walker did not deserve to take the ice at TD BankNorth Garden. He's not a dirty player, but he lost his cool, and was never punished. He didn't belong in Game 7, and yet the NHL allowed him to be the hero. Mister Walker, do not ever dare come to Norwood, Massachusetts. And the same goes for Mister Bettman, or any other NHL official. Please, for the sake of my clean criminal record, do not come to Norwood.

But that's an easy excuse, isn't it? Quite frankly, I hope Scott Walker contracts sine flu and croaks in the next two days, but this game went beyond the temper-tantrum throwing cunt from Cambridge, Ontario.

Power plays, that was the Bruins' strength in the regular season, and weakness in this series. There's no ifs ands or buts about it. The Bruins looked lost with a man advantage in this series. Due credit to the Hurricanes, for their penalty kill. But due criticism to the Bruins for not making the power play unit productive.

The good news is that this is a young team. There are some restricted free agents, and there's sure to be some off-season drama. Nevertheless, the core of the team should remain intact. I don't really feel like writing much else.