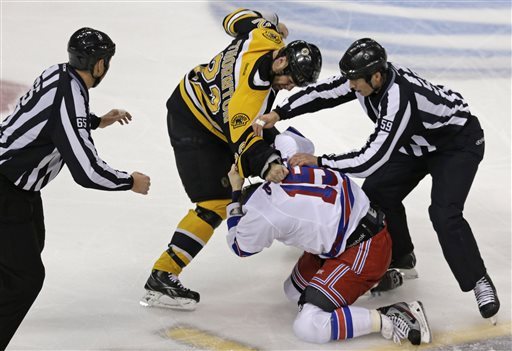 It was very important for the Bruins to win this series as quickly as possible. When they won the Cup in '11, they probably wouldn't have had enough gas to play 7 game series against the Lightning and Canucks if they didn't sweep the Flyers and get a few extra days off (about a week off). Now the Bruins and Penguins will wait until the Western Conference semifinals wrap up.

The Bruins were close to losing many of the games in this series, the Rangers were rarely close to winning them. I'm not taking credit away from the B's, just pointing out that the Rangers are not a team that knows how to win tough playoff games or series. John Tortorella overcoaches, the forwards don't have any creativity, the defensemen don't get involved in the play, and as a whole the team lacks spirit. They have effort, just no soul. They're like the frozen meatballs you get at the store, while the Bruins played like made-from-scratch meatballs made with Grandma's old recipe. The Bruins played with heart and soul. The Rangers just played.

Tortorella's decision to change and focus on his 4th line was a fatal mistake. I might write a blog post devoted entirely to how bad of a coach he is. Anyway, he decided to send his 4th line to antagonize the Bruins 4th line. In other words, he decided to force Shawn Thornton and Gregory Campbell act like Shawn Thornton and Gregory Campbell. Good call, Torts. Tortorella made the Bruins 4th line extremely comfortable by choosing to play their brand of hockey. And as if Derek Dorsett had a chance to win a fight against Thornton. "I'll beat your ass all day," Thornton yelled to Dorsett after their fight in Game 5.

Dorsett also committed some stupid penalties. Every Tortorella tactic in this series made the Bruins play better. Thanks, coach.

Tuukka Rask redeemed himself for his Game 4 debacles. He made a game-saving stop on a Callahan breakaway with 8:37 left in the 3rd. It was a 2-1 game at the time, and if Callahan scores that changes everything. That's what a timely save is. In a 2-1 game in the 1st period, that save isn't as important. Hockey is like any other sport. What you do in the 4th quarter or the 9th inning means so much more than at the start of the game.

Torey Krug was the other hero of the game for the B's. I was thinking about why the Bruins haven't called him up before. The problem was that the B's were all set with defensemen. Chara, Seidenberg, Hamilton, Ference, McQuaid, Boychuk. Those are 6 quality guys. And Hamilton couldn't go to the AHL it was either stay in Boston or go back to his Juniors team. There was no room for Krug to earn a spot, with 5 good veteran defenseman and a rookie who couldn't be sent to Providence.

I think the Penguins will play tighter on Krug. The Rangers chose to collapse more, which was dumb against Krug, and clog the middle of the ice. This gave Krug acres of space to wind up and fire shots. Pittsburgh should cover him tighter. Which could open up other areas of the ice that the forwards will have to exploit.

Milan Lucic was skating like a psychopath in the 3rd. That freight-train needs to keep rolling against Pittsburgh.

Almost everyone is contributing, or has contributed. And that's what needs to continue against the Penguins. Compared to Toronto and New York, Pittsburgh is on a completely different planet. The Penguins scored 35 more goals than the Rangers in the regular season (0.72 more per game), and 34 more than the Bruins. They allowed only 10 more goals than the Bruins allowed. Only the Blackhawks had a better goal differential.