Alabama knows how to make a football schedule 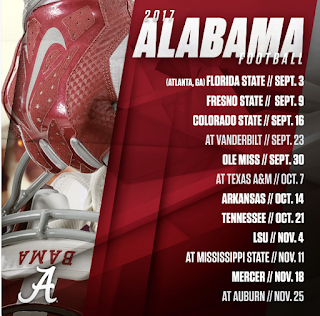 Alabama opened their 2017 season with a convincing win over Florida State Saturday, giving the Tide an even firmer grasp of the #1 spot in the country.

But even if Bama had lost, because the game is so early in the season, they still would have been able to climb back up the rankings into a playoff spot. That's what's so ingenious about scheduling a marquee game against an elite opponent so early. It's the best time of the year to lose because you have almost 3 months to move back up as other top teams around the country lose games later in the year.

You're also guaranteeing yourself the spotlight in a Week 1 that is typically saturated with boring cupcake games. Penn State vs. Akron, Stanford vs. Rice, Howard vs. UNLV... well not that one. Anyway, with the spotlight on you, if you win, most of the college football world will see it and talk about it all week, enhancing your status as a top team.

The key to playing these top-tier non-conference opponents is a neutral location. This keeps Bama from going into a tough place to play (there's plenty of times they do that already in the SEC), and also gives their players the experience of playing big games away from home. So no home-field advantage, but no advantage for the opponent either.

Many teams schedule easy opponents in Week 1 partly because it can be a quasi-preseason game. Coaches want their players to get into a groove, especially their new starters. However the reality is, there is no disadvantage to playing a tough opponent in Week 1. The opposing players are just as rusty, their freshman just as inexperienced. It's an even playing field.

So instead, Alabama elects to play its easiest opponents in November, the Saturday before their Iron Bowl rivalry game against Auburn. Bama will host Mercer this year in the week before playing Auburn. Last year it was the Chattanooga Mocs. In 2015 it was Charleston Southern.

These games are like dress rehearsals for Alabama. The opponents are like sparring partners for the Tide to practice on, without any real threat of being hurt. The players get a bit of a break but also maintain their rhythm the week before going into what is often the biggest game of the year.

None of this is a criticism of Alabama or Nick Saban. This is in praise and admiration. I'm also a bit jealous because I wish Bill Belichick and the Patriots could create their own schedule the way college programs are able to.

I also think it's weird that you don't see other teams adopting some of these approaches to scheduling (although many teams do not play non-conference road games). Why schedule a cupcake in Week 1 when you can add them into the schedule as a semi-scrimmage before a big game? Why avoid quality opponents when you can perhaps meet at a neutral location early in the season and either win to add to your resume, or lose and have 11 more games to recover.