David Ortiz, Clay Buchholz, Jarrod Saltalamacchia and Vincente Padilla. Those are the 4 Red Sox who went to Johnny Pesky's funeral on Monday. The rest of them couldn't be bothered.

How is it that Vicente Padilla has been with this team only a few months, and he makes the effort to go to Pesky's funeral but long-time Sox players don't? Where were Josh Beckett, Dustin Pedroia, Jon Lester, and Jacoby Ellsbury?

Pedroia says that his wife is pregnant and could give birth any day. The last time she gave birth there were complications, so perhaps Pedroia's absence is pardonable.

What about everyone else?

A busload of ushers, ticket-takers, and security were able to find the time to get to the funeral. These are people with full-time jobs who made the effort to pay their respects to Johnny Pesky. The Sox players were off on Monday.

Red Sox Information Minister Larry Lucchino defended the players, pointing out that they had a late (early Monday) arrival time after losing to the Yankees Sunday night, that the buses to the funeral that the team provided were essentially full with staff, and that players would be paying tribute on Tuesday by wearing the number 6.

This organization, from top to bottom, has an excuse for everything. So many outside factors seem to conspire against them. The schedule, the wind, the umpires, the official scorer, the media, et cetera. And now current Sox players can't be bothered to attend the funeral of a man who has been a part of the game and this team for 6 decades? On an off day?!? BECAUSE OF A LATE NIGHT AND FULL BUSES?!?

Johnny Pesky was rolling over in his grave before he was buried in it.

Thank you, Red Sox. Thanks for these lost seasons. Thanks for the shame. Thanks for desecrating those uniforms, for befouling a city with the stench of apathy, stale Bud Light, and Popeye's chicken bones. Thank you for not caring about the death of a man who cared more about the game and winning than the entire 2012 Red Sox combined.

Thanks for nothing, you bastards. 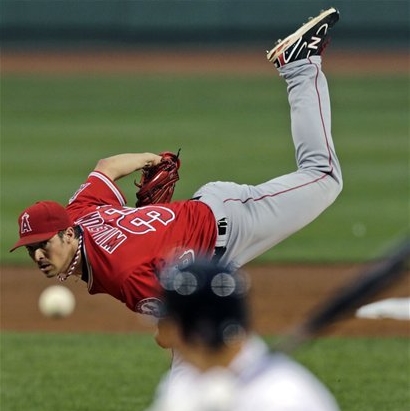 
And it's true. The Red Sox did more to lose this game than the Angels did. Franklin Morales, Clayton Mortensen, and Alfredo Aceves sucked. And the defense was shabby.

The offense scored. But as we've seen all year long, when one part of the team excels, the other part cancels out the good performances. Pedro Ciriaco (4 for 6), Jacoby Ellsbury (3 RBI), Dustin Pedroia (double, homerun, 5 RBI), and Cody Ross (homerun) did their job. Adrian Gonzalez could have done better. As a unit, though, the Sox offense did what should have been more than enough.

Guys like Morales and Felix Doubront have come down to earth. Earlier in the season they were pitching above their weight-class. They've since regressed to the mean.

Then there's the bullpen. To be fair, they've been overworked due to the inability of the starters to go deep into games. But the bullpen was built to fail from the beginning.

Get rid of Papelbon, convert Bard to a starter (not because you think it's a great idea, but because you don't want to sign a proven starter), sign Andrew Bailey, and it's no surprise that the bullpen hasn't been great.

Last night Aceves blew his 7th save. He has a 2-8 record. Even after blowing the save, he allowed another homerun. Bailey has missed most of the season due to injury (which he's always been susceptible to), but he's looked poor since returning from the DL. Mark Melancon has been a complete load.

This team sucks. They're 7 games under .500, 8 games under .500 at home, 9 games in the loss column out of a Wild Card spot. They'll host the Kansas City Royals, who are only 3 games behind the Sox in the standings.

Jon Lester faces Bruce Chen. Chen has 2 more wins than Lester. This should be a win, because Lester's been decent lately and the Sox hit Chen well. This Sox team finds ways to lose, though.