Overall, I think we've all been quite disappointed by how poorly the Sox have played this season. Even the most optimistic Sox fans now have a generally negative feeling for this club. But there are a few bright spots, a few pleasant surprises. And if not for them, the Sox would be in even worse shape.

Apart from these two guys, the big names on the Sox have been disappointing. Adrian Gonzalez hasn't had many big hits. We'll give Youkilis and Ellsbury a pass due to injury. And then on the mound, Beckett might be the most hated man in Boston, Lester is nowhere near as elite as he claims he should be considered, and Buchholz has 4 wins but an ERA of 8.31.

It's been the supporting cast that's carried the load for the Sox.

Mike Aviles, who almost didn't make the starting lineup, is third on the team with 21 RBI. He's hit 5 homeruns. His previous career high was 10. And he's only 30 RBI shy of matching his career high of 51. He's making $1.2 million.

Doubront isn't a Cy Young Award candidate. But he's 3-1 with 4 Quality Starts, a 4.46 ERA, more innings than Beckett, higher K/9 than Beckett, and much more consistency than Beckett. Doubront has not missed a start. He is worth $484,000, and then some.

Beckett makes more than 35 times as much as Doubront. More than twice as much as Lester. The Sox don't pay Lester and Buchholz much compared to what our expectations of them were. But they've still been disappointing. None of them have an ERA below 4.

At the start of the year, I thought Ross was a joke, Sweeney would be a serviceable 4th outfielder, Aviles was a defensive liability, and Middlebrooks was in AAA Pawtucket. Now they're responsible for 40% of the team's RBIs. I thought Doubront might manage to be a not-so-bad 5th starter. But he has as many Quality Starts as any other starting pitcher.

I have two points I want to make with all this data. The first is that there are some players on this team that are worth rooting for. Sweeney, Ross, Doubront, Middlebrooks and Aviles are hungry, hard-working players. And I enjoy seeing them making the most of the opportunity they have found here. Also, Ortiz and Pedroia are busting their ass to produce for this team.

The second point I want to make is that the "stars" on this team, particularly in the rotation, aren't pulling their weight. Their weight is being pulled by the supporting cast. Watching this team play is like watching a movie with the star actors mailing in their scenes, and the supporting guys stealing the show. So maybe in the future, instead of big budget blockbuster action-films loaded with big names, the Sox should try to find more Paul Giamatti types. Quality players with talent and motivation.

I miss Mark Bellhorn, Bill Mueller, and Kevin Millar. Sweeney, Ross, and Aviles remind me of them. They're just overshadowed by clowns like Beckett and no-show stars like Gonzalez.
Posted by rob at 11:00 AM No comments:

Sox on a Winning Streak 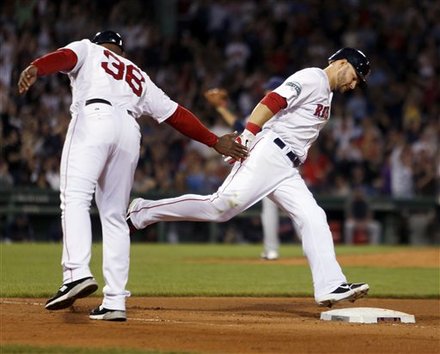 I thought about using a headline like "Sox on the Warpath," but racist article titles are the domain of CBS Sports and I wouldn't dream of trying to outdo them.

Can Felix Doubront and Clay Buchholz pitch every game for the Sox? The team is 5-2 when Doubront starts, 4-3 behind Buchholz (9-5 combined) and 6-14 whenever anyone else starts. .563 with Doubront or Buchholz, .300 with Beckett, Lester, and Bard.

Doubront had another very good start Saturday night. He's been a pleasant surprise this season. Imagine if he'd been struggling these last few weeks, how bad the Sox would be. Saturday night he went 6 innings, only allowed 3 hits, and earned victory #3.

Yesterday, the Sox simply annihilated Justin Masterson. He had no chance. I'm surprised he lasted 6 innings. The Sox swung and missed only 7 times against him. That's it. He wasn't fooling anyone. Nava was 2 for 2 with a pair of doubles. Middlebrooks hit his 4th homerun. Saltalamacchia exploded, going 3 for 4 with a homerun and 5 RBI.

Bard looked shaky. He only allowed 1 run (he walked it in), but in his 6 innings he gave up 6 hits and 4 walks. Way too many walks, especially with the Sox taking a big early add and consistently adding to it. Throw strikes. A few double play balls saved him, and the Sox building a big lead helped even more.

At least he had 0 balks.

Bard is still a project. I'm not sure how well he'll do in the rotation. As a starter in the minor leagues, he had problems with walks. He's walked 20 guys already, in only 37.2 innings. He's had three starts with 4 or more walks. It's a problem. The good news is if he doesn't work out in the rotation, he'll help out the bullpen. Maybe even close.

The Sox will try to make it four straight wins tonight against the Mariners. Lester opposes Jason Vargas, who is 4-2 on a 16-20 Seattle team. He has a 2.79 ERA, 5 Quality Starts, and his last outing was an 8 inning gem against Detroit. In other words, this is not Justin Masterson.