This was at the end of Philadelphia's 6-4 win yesterday. Not surprisingly, it starts with a Pittsburgh Penguin aiming for an opponent's cranium.

As much as I dislike Hartnell, I have to appreciate the Ric Flair hand-to-ear gesture during his "exchange" with that Hulk Hogan looking Penguins fan in the white Malkin jersey.

These teams will play each other to end the regular season on Saturday. And then it's almost a certainty that they'll square off in the first round as the 4 and 5 seeds in the East.

I can't wait for that series. I might have to root for the Flyers. Which will make me feel dirty. But not as dirty as the Penguins play. 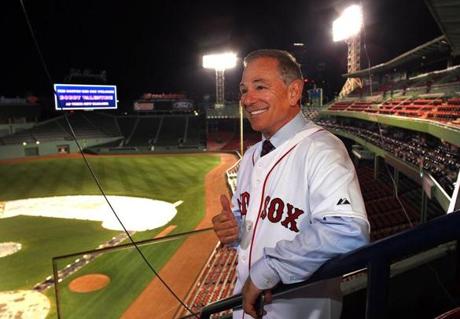 Lester, Beckett, Buchholz, Doubront, Bard. That will be what the Red Sox rotation will look like to start the season. And maybe Jordan's Furniture should give away free stuff if that rotation looks the same in September. Or even May.

You'll notice the absence of Alfredo Aceves. Rumor has it that Andrew Bailey is injured and when asked about that injury, all Bobby Valentine could do was place a finger to his lips and pretend to gag. Which I guess is the same as Bill Belichick saying "we can't comment on that player because we don't fully know that player's status at this time."

Aceves could go to the bullpen while Bailey recovers, possibly assuming the closer's role.

This rotation is unique. A career #2 pitcher as the #1, a guy who's been an Ace in the past and has also sucked in the past as a #2, a recovering back injury in the #3 spot, a puzzling quadruple-A pitcher in the #4 spot, a converted reliever who struggled as a minor league starter as the #5 pitcher, and the closer's role filled by a guy who has performed decently as a starter.

All with Bobby Valentine using gestures and jokes to talk about the team.

Even if this rotation proves disastrous, it will at least be interesting and entertaining to see the disaster unfold. It's like a Michael Bay movie. Only Bay is more willing to spend money.
Posted by rob at 12:00 PM No comments:

So Should the Celtics Still Trade Rondo? 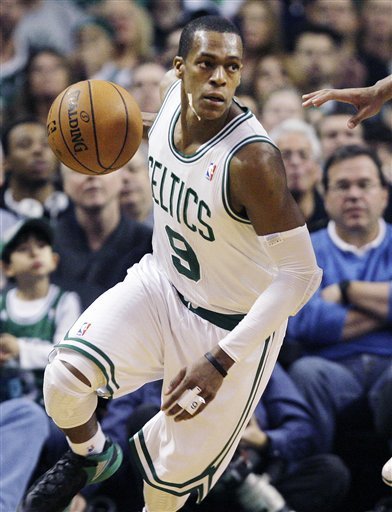 I never fully understood the logic behind those who argued that the Celtics should trade Rondo. While he isn't the best PG in the league, if you think the position is so important that you need to build a team around it, then that's even more reason to not trade him unless you can directly replace him with a superior player. If you want him gone because he isn't a good enough point guard, you'd better have a clearly better PG waiting in the wings to take his place.

How well Rajon Rondo plays has dictated how well the Celtics have played. That might be a scary thought to some, but it's how the season has gone. It's a fact. Time to deal with that. And time to also accept the fact that if Rondo were removed permanently from this team, they'd struggle.

He had yet another triple-double. And he seems to excel in big games against tough opponents. He sees the floor, he reads the play well, he's selfless. You might want more from a point guard, but you don't NEED more.

The Celtics played about as good of a game as they're capable of. 47.1% shooting, 20 of 22 from the line. Miami only had 9 fastbreak points. So I'm still unsure if they can go the distance against a tough team. How many nights will you shoot close to 50% and miss only 2 free throws?

But the Celtics have turned a corner lately. They're a team to contend with. They're leading the division, and are only 1.5 games behind Orlando for the 3rd seed. They're not an easy first or second round draw.

They host the Spurs on Wednesday. 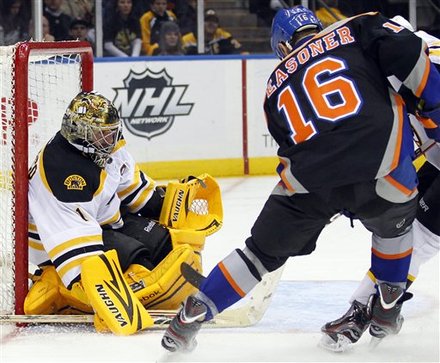 The Bruins clinched the Northeast Division, clinched the #2 seed, and did it all in a weekend on Long Island then Manhattan.

The Bergeron line absolutely dominated the Islanders, combining to score 3 times in the 3rd. That line is loaded with talent. Seguin and Marchand each have 27 goals, Bergeron is one of the best defensive forwards in the NHL, and he's scored 22 for himself. When that line gets hot, the Bruins get hot.

The win against the Rangers was very impressive. It was a close game, a physical game, a game of mistakes. It was very much like a playoff game. The Bruins made fewer mistakes. They also did a good job capitalizing on the Rangers' mistakes. And Thomas was the better goalie, stopping 33 of 34. Thomas hadn't beaten the Rangers since November 17th, 2010.

The Bruins likely won't face the Rangers until the Eastern Conference Finals. The Bruins are definitely the #2 team in the East, and the Rangers are a point away from clinching the #1 spot. It's good to know that the Bruins can beat that team, and do so on their ice.

Ottawa will most likely be the Bruins' first round opponent. The Senators have 4 point cushions ahead of them and behind them. With only 3 games left, it's hard to imagine them passing New Jersey for 6th or falling below Washington to 8th.

Boston is up 4-1 in the season series against Ottawa, with a game on Thursday (which I am going to).