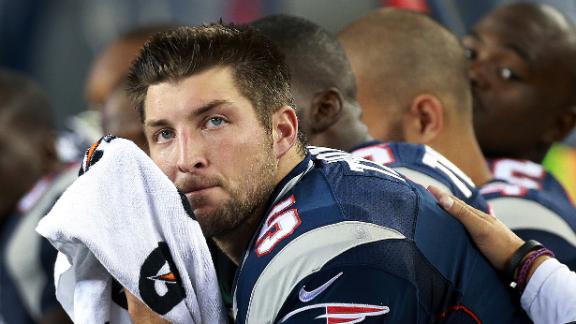 The Tim Tebow era was over in New England before it began. There just wasn't any room on the Patriots' roster for a third pass-thrower who couldn't throw passes.

Speaking of leaps of faith, how about all those people who bought Tebow gear? All those t-shirts and jerseys will soon be half-price at the Pro Shop. People would have been wiser to have waited to see if he would make the team before they committed their cash. If cut, you can get the shirt at a bargain. If not, you can still deck yourself out in the jersey of a 3rd string QB.

I don't mean to bash Tebow. He seems like a nice guy in a League populated with jerks, scumbags, and the occasional murderous sociopath. He just doesn't fit in the NFL, not as a person, not as a player.

When the Pats signed him I thought he could be a decent #2/#3 quarterback. After all, he's won games, even won a playoff game. You can do worse with your #3 QB. And I don't trust Ryan Mallett. Mallett is reckless. He just chucks the ball. He's Brett Favre, Jr. Mallett has a great arm, but Tebow seems to know how to win games.

I know now that Tebow is less likely to find work as a backup quarterback than he is to find it as a starter. Because as a backup putting him on the field requires the entire offense to change. He can't come into a game for an offensive series while trainers look at Brady. He can't play a quarter or a game if Brady gets a minor injury. Not without the offense changing everything about how it plays.

A backup QB is like a spare tire in the trunk of your car. A typical spare requires that you drive a little slower than usual. As a spare, Tebow is more like an oversized monster truck tire. The car won't function unless you change the 3 other tires on your car. 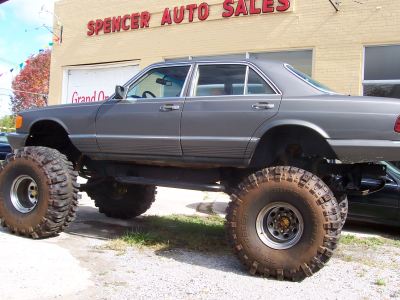 There are enough QB openings around the League for Tebow to find a job. And I wish him well. However, he seems to be falling victim to what happens to some Heisman winners. Sometimes what makes them great in college just doesn't fit in in the NFL game. See: Eric Crouch, Troy Smith, Matt Leinart, Doug Flutie, et cetera. 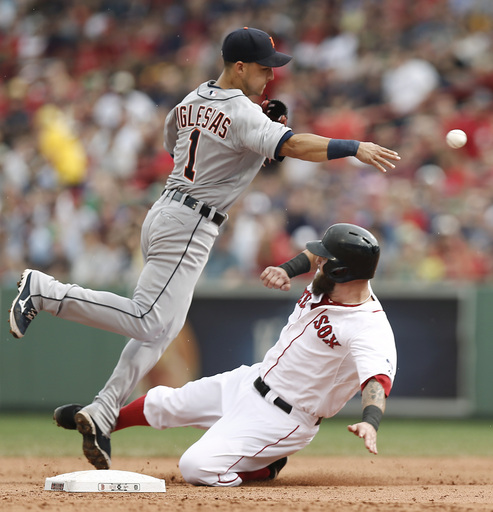 Monday afternoon's game felt like a playoff game. It was close, the pitching was good, there were some impressive defensive plays. And timely hitting (or a lack thereof) determined the outcome.

Against teams that would currently be in the playoffs, the Red Sox have an 18-17 record. That includes their 2-1 series victory over the Dodgers, and a 16-16 record against AL playoff teams. However, that record is weighted heavily by their season series with Tampa Bay, which the Sox lead 10-6. The Red Sox are now 1-3 against Detroit, 2-4 against the Rangers, and 3-3 against the A's. Taking the Rays out of the equation, the Sox are 8-11 against playoff teams.

I'm not trying to poop in the punch bowl and ruin the party. What I am saying is that in one month's time when the Sox are in the playoffs, they can't let opportunities slip by like they did Monday afternoon. The Sox were 0 for 11 with runners in scoring position yesterday. They grounded into 3 double plays.

One play sums up this game for the Sox. Jarrod Saltalamacchia's failed sacrifice bunt in the 7th. With 2 on and 0 outs in a 2 run game, I don't like the idea of bunting in that situation to begin with. That being said, if you do bunt, it has to be executed. Saltalamacchia bunted straight into the ground, it hopped high and in front of Tigers catcher Alex Avila, who made a bare-handed grab and an excellent throw to third to eliminate Daniel Nava. It was a useless out.

That miscue was one of several missed chances for the Sox. It was also one of several very good defensive plays made by the Tigers, some made by old friend Jose Iglesias (why are former Red Sox players always called "old friend?").

This was a close game and Detroit made all the big and small plays that gave them the victory. That's what happens in playoff baseball.

The Red Sox can do better. And they're going to have to in order to win tonight. They face 19-1 Max Scherzer. Some of the Sox have good numbers against him in the past (Ellsbury is 5 for 9 with 5 RBI, Ortiz is 7 for 13 with 3 homers, Saltalamacchia is 5 for 12). But Scherzer is pitching like a completely different person this year. So it's up to Jon Lester to try to match him. Or at least keep the Sox in the game until they can get to Detroit's bullpen. Lester's riding a streak of 5 straight Quality Starts, and he finished August with a 2.97 ERA.

However, the Tigers have frighteningly good numbers against Lester. Combined they're hitting .397 off him, with a 1.061 OPS. Miguel Cabrera's status will be key as he's 10 for 16 (.625) against Lester. So Lester has to step up and beat hitters who have beaten him in the past.

If the Sox win tonight's game, they'll have proven quite a bit about themselves, and convinced me that they're ready for playoff baseball.

Photo Credit:
AP Photo/Winslow Townson
Posted by rob at 9:30 AM No comments: