This isn't sports related, but it's a major story and it's difficult to think about sports when you hear about a story like this.

At a midnight showing of The Dark Knight Rises in Aurora, Colorado, 12 people were killed and dozens more wounded. About 20 minutes into the movie, a man in his young 20s stood at the front of the packed theater, tossed a tear gas grenade into the crowd, then opened fire. He walked up the aisles of the theater, shooting people at random as they fled. He was armed with an AK-type assault rifle, a shotgun, and handguns.

A man was detained by police in the parking lot and is believed to be the shooter. His name is James Holmes. He's 24 and lives in Aurora.

The one thing about this that doesn't piss me off is that the shooter surrendered. Typically in these mass shootings, the guy kills himself. Then for the next 9 days the media, psychologists, pundits, and everyone else tries to speculate why the person did it. They blame hard rock music, or violent video games, or movies, or drugs, or politics, or gun control laws (or lack thereof). Marilyn Manson gets blamed for more murders than Charles Manson.

With this jagoff alive, we can all learn why he really did it. I already have a guess. He's a selfish, spoiled brat. In his own mind, the world revolves around him. And instead of adapting to the reality that it doesn't, he's decided to make sure that it does. Instead of adjusting to the lack of omnipotent control he has over his own life, he decided to take control of other people's lives.

And if society does have a problem that's contributing to massacres like this one, it's that we always look for a problem to blame. We never blame ourselves for our shortcomings and therefore never come to terms with them and adjust to them. And at the same time, we glorify ourselves as being the center of the world. It's a psychological conflict that can result in disorder, disaster, but in most cases just turns people into jerks.

It just seems like in the last 10 years, we've become more and more selfish. And also taken less responsibility for our own actions. We don't try to improve our faults, we don't even accept them. We blame other people for them. And in a lot of ways, we dehumanize other people.

What this jerk did was the ultimate dehumanization of other people. He did not care about the people he was killing. He didn't even hate them. At least hate is a humanizing emotion. This bastard was indifferent, because in his own mind he's all that matters.

Ross Knocks Sox Off with Walk Off 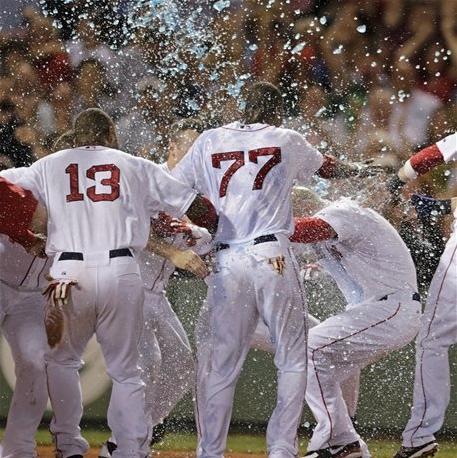 Cody Ross continues to belt out 3 run homeruns. And Clay Buchholz is once again pitching as well as he did before his esophagitis. This allowed the Red Sox to beat the White Sox 3-1. The Red Sox won 3 out of 4 in their series against the AL Central leaders.

I'm going to entertain a moment of optimism here, so bear with me. The Red Sox could have an outfield with a power-hitting Cody Ross, a five-tool player like Ellsbury, and a speedy line-drive hitter like Carl Crawford. If all three of these guys are performing at their best, that's a very productive trio.

One tough but enjoyable question to ask is: where do you bat all these guys in the lineup?

Clay Buchholz's ERA might still be a too high 5.19, but since May 27th (his last 7 starts) it's 2.63. He has a track record of starting seasons slow and eventually settling down, and 2012 doesn't appear to be different. He went 8 innings last night, scattering 6 hits, allowing just 1 run, and striking out 6.

Buchholz is the key man in the rotation. Lester, perhaps in a quest to be seen as an Ace, seems to be having some psychological difficulties. Beckett will inevitably be inconsistent and unreliable. Doubront and Cook have been solid, but they're not front-of-the-rotation types of pitchers.

Buchholz can go on a run of seriously good starts. He can spearhead the rotation. He isn't an Ace but he's capable of pitching like one for extended periods.

At the same time, if he gets hurt (as he tends to do) or has a bad stretch (as he can sometimes have), then he can sink the rotation. He's either an engine to drive the pitching staff forward, or an anchor to drag them down.

The Red Sox host the floundering Toronto Blue Jays this weekend. Tonight Josh Beckett faces Aaron Laffey. The converted reliever has been Doubrontlike in most of his starts. He faced the Red Sox in late June and pitched 6 scoreless innings.

Photo Credit:
AP Photo/Charles Krupa
Posted by rob at 10:30 AM No comments: