Daniel Bard: To Be or Not to Be a Reliever

I can't help myself... Compared to the tempest before and after the Kevin Youkilis trade, any discussion about Daniel Bard seems to be much ado about nothing. But it's actually been an interesting comedy of errors. It's been "decided" that Bard will return to his reliever role. I suppose all's well that ends well.

In 7 appearances for AAA Pawtucket, Bard has a 6.30 ERA. He's walked 5 in 10 innings and allowed 10 hits. He recently blew back-to-back save opportunities for the PawSox. And on Sunday, after retiring 5 batters with ease, he walked 3 in a row and was removed from the game.

His velocity isn't quite back where it was as a reliever. But while he's struggling to find his fastness, he's also trying to regain control. Trying to both throw harder and with more precision doesn't sound like two goals that naturally go together.

The decision to make Bard a reliever was essentially made once he was sent down to Pawtucket, it was just never announced. He had to pitch extremely well to regain his starting role. He didn't.

In my post about Youkilis being traded I mentioned the communication struggles of the confused Red Sox chain-of-command. Bard got a voicemail from Bobby Valentine last week about the decision to make him a reliever. Valentine was under the impression that GM Ben Cherington had already spoken to him. He hadn't. And Bard had decided a few days earlier that he intended to be a reliever.

So the Red Sox made a decision on Bard, but never said "alright, Ben, you tell him." Or "Bobby, he'll want to hear this from you."

Is there a functioning chain of command running the Red Sox? Are roles clearly defined?

And about Bard, I can't blame the Sox for trying to make him a starter. BUT, their motivation to do so was flawed.

The Sox didn't want to acquire another starting pitcher. So they turned to Bard to be a starter. In the past there was never an urge to convert Papelbon, for instance, because the Sox were all set for SPs. But instead of signing a mid-level Edwin Jackson type of guy, the Red Sox said "Bard could start." Their motivation was based on what they thought he COULD do, not what he SHOULD do.

Now, let's just hope he's able to return to form, and return to Boston.
Posted by rob at 11:00 AM No comments: 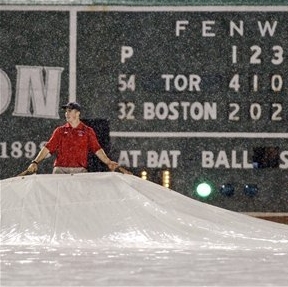 It was ugly last night. Ugly defense, ugly pitching, ugly weather. The Blue Jays hit a trio of 2 run homers (2 off Doubront, 1 off Albers), the Sox made mistakes in the field, and a battle between two pitchers having off-nights ended with the Jays on top 9-6.

This was one of the few times that Felix Doubront hasn't pitched well enough to give the Sox a good chance to win the game. He'd been averaging 8.51 runs of support per 9 innings, but he hadn't needed that to get his 8 wins. He's typically pitched decently enough for the Sox to win if they score 4 or more runs.

Not last night. He struggled to throw strikes at times. And when he did hit the strikezone, the Jays hit him. 51 of Doubront's pitches were strikes, 25 of those were hit in play. You can blame unfortunate bounces for some of Toronto's scoring, but when a pitcher allows a team to put the ball in play that often, bad things happen.

It's important for the Sox to rebound from this ugliness and not allow it to become a mini-streak. Daisuke is on the mound tonight. He faces Aaron Laffey. He's a lefty making his first start of the season.

Elsewhere, Kevin Youkilis made his White Sox debut and was 1 for 4. And I already dislike Brent Lillibridge. When asked about moving from team-to-team, he called baseball a "sorority." People are stupid sometimes.