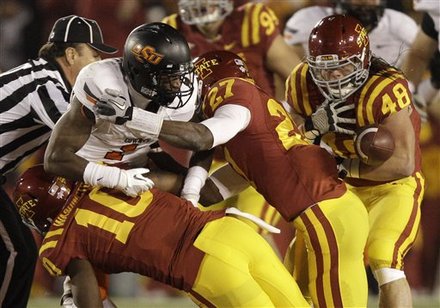 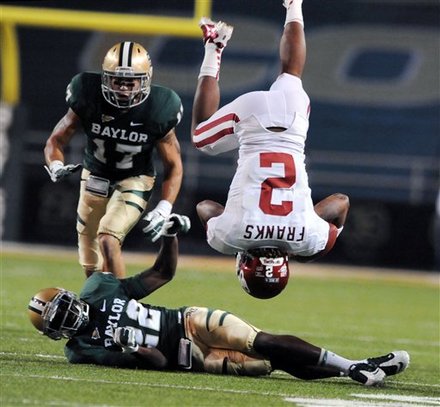 I thought it was impossible, but it looks like Alabama and LSU are bound for a rematch. Oklahoma State couldn't handle lowly Iowa State, then Oregon and Oklahoma lost their second games of the year, effectively eliminating them from title contention.

So if LSU takes care of business against Arkansas (then Georgia), and Alabama beats Auburn, it looks like we'll have a rematch between two SEC West opponents. Who else could it be?

Oklahoma State? Even if they beat Oklahoma, they don't have the quality wins. Beating OU doesn't have the same amount of weight as it would have.

Virginia Tech? Is winning the ACC that impressive? Besides, for VT to finish with one loss, they'd have to beat Clemson, which would be their biggest win. They also lost to Clemson. Not too impressive.

How about Stanford? Well they nearly lost to Cal, and their loss to Oregon looks worse after the Ducks lost to USC.

Houston? They're undefeated. It sucks that in this system that they won't get a shot, but how would they do in the SEC West?

The reason Alabama deserves another shot is because they're the answer to a question. It's a question I've never asked when thinking about BCS title contenders until now. If LSU are the undisputed #1 team in the country, who has the best chance to beat them? It's not Stanford, not Houston, not Oklahoma State.

The Tide have the best chance among the one-loss teams to beat the Tigers. They should have beaten them if not for Nick Saban going with a weirdly timed wildcat trick play. They are the clear #2 team in the country, so long as LSU is #1.

Of course, things once again get messy if Arkansas beats LSU. Or if Auburn beats Bama.

What the Red Sox Forgot to Consider

When the Red Sox fired Francona, they forgot to do something. They forgot to take a pivotal step in the process. And now they're paying the price for it.

Whether you agreed with Francona's dismissal or not, or were like me and didn't like it but begrudgingly understood it, the Red Sox' Front Office didn't have a plan to replace him.

Epstein was replaced in a heartbeat. But Francona's replacement has been a bit more difficult to find. Maybe the Sox should have considered that when they decided not to keep Tito in town. Instead, they threw the Captain of the ship overboard without giving thought as to who would take the helm.

Now we're talking about Bobby Valentine? I've heard fans that want guys with no managerial experience. Because that will straighten out the Josh Becketts of the world, someone who is figuring out how to do their job, and is one phone call away from going back to being some team's 3rd base coach.

I guess the manager's identity doesn't matter. It's still very telling about how much of a mess 4 Yawkey Way is that they fired a manager well over a month ago, and are interviewing hack TV personalities like Bobby Valentine.

Why not Remy? Why not Cam Neely? How about Jason Varitek? Or Doug Mirabelli.

It's November 21st, do you know who the manager of your ballclub is?
Posted by rob at 12:00 PM No comments:

The Worst Timeout Ever 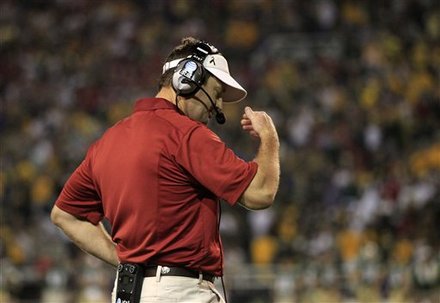 Last week, Rex Ryan called the timeout Mark Sanchez took just before halftime "The stupidest play in football history." Bob Stoops rewrote those history books Saturday night, when he called timeout with 51 seconds left in a tied game while Baylor possessed the ball. The Bears were content to go into overtime, as they had no timeouts. I guess Stoops wanted to force a 3-and-out, get the ball back with 40 seconds, and try to win in regulation (with no timeouts left).

Two problems with that:
#1: The OU defense had only forced two 3-and-out drives (one was 4-and-out) all game.
#2: Robert Griffin III had been torching Oklahoma's defense all night.

Stoops could have gone into overtime. And if you believe your team is the best, why not do that? That way, even if RG3 beats you, there's a chance to respond. The Bears had the ball on the 20, and only needed 47 yards to reach their kicker's range of 50 to win the game. Baylor had already amassed 536 yards of offense.

Bob Stoops cost his team a spot in the National Championship Debate, which would have raged for weeks. Now they must run the table just to win the Big XII.
Posted by rob at 11:00 AM No comments: 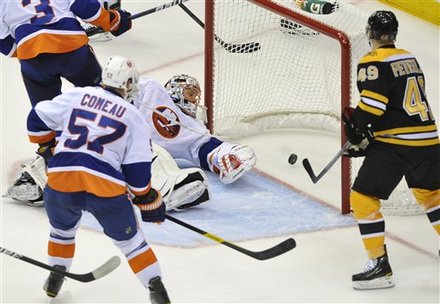 How dominant have the Bruins been in this 8 game win streak? They've outscored their opponents by 28. They still only have the 13th best record in the NHL, but their goal differential is the highest in the NHL. They're +25. The second best differential is Philadelphia's +13.

Their 6-0 win against the Islanders was a product of solid defense preventing the Islanders from getting anything going. New York managed 2 shots on goal in the 1st. Just 2.

Then the Bruins scored opportunistically. Bergeron finished a Seguin and Marchand breakaway. Seguin is now a point shy of his TOTAL from last season. Horton put in a Power Play goal and Kelly was given an early Christmas present from Rick DiPietro.

After that, the Bruins didn't play with 110% intensity, but they didn't screw around either. And in the 3rd period, the floodgates opened again. Ference scored just after the end of a Power Play, Kelly scored an effort goal, and Chara had a rare (for him) breakaway goal.

Next on the schedule is a decent team. If the B's want to extend their winning streak, they'll need to play with a bit more fire. That shouldn't be a problem considering they'll be in Montreal. The Canadiens, by the way, were the last team to beat the Bruins. Twice. I'm sure the Bruins will want a measure of revenge.