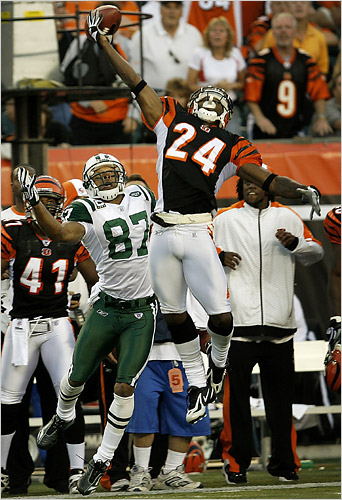 After cutting Fernando Bryant, the Patriots almost had to go out and get another defensive back. They got one of the best available in Deltha O'Neal.

O'Neal is a 9 year, 31 year old veteran. He isn't the same CB as he was on the Broncos. Then again, playing in Cincinnati has a way of changing people. He played all 16 games last year, starting 8 of them. He had 9 passes defended and 1 interception.

He's only two years removed from a Pro Bowl season in '05. If he recaptures some of that magic, the sky's the limit. And as far as the Pats go, even an old player possibly on the downslope of his career is an improvement at CB.

The Pats also claimed TE Jason Pociask and OT Mark LeVoir off waivers. Pociask was formerly with the Jets, LeVoir was claimed from the Rams.

The Pats cut veteran CB Fernando Bryant on Sunday, thinning the depth of an already malnourished defensive backfield. But Bryant performed poorly in preseason games. Giants' TE Darcy Johnson described being "tackled" by Bryant: "I wasn’t going to let one of the little guys take me down."

The Patriots then cut WR Chad Jackson, former 2nd round pick out of Florida. They waited until Sunday to do it, probably to prevent teams from picking him up without having to drop someone else. He was plagued by injuries, but he never seemed to live up to his potential talent. He reminded me of Bethel Johnson in that regard. But at least Bethel was willing to play special teams, and played them well.

With Jackson's talent, he was a #3 or #4 receiver on this team. But he wasn't good at adjusting, and his undrafted replacements (CJ Jones and Ray Ventrone) can do well at wideout, and even better on special teams.

My money's on Jackson ending up with the Jets. They always wind up with our leavings.

The Pats also cut safety John Lynch in a surprise move. However, that move looks like it's a bit of a trick. If the Pats cut him, play week 1, then sign him, they don't owe him any guaranteed money. He performed well in preseason games, and after being cut said: "I have no regrets about my time thus far with the Patriots." The words 'thus far' lead me to believe that he expects his time with the Patriots to continue at some point. Matt Gutierrez was another surprise cut. An even bigger surprise was the presence of Matt Cassel on the roster. He hasn't shown anything good, in preseason or regular season games. He must practice well, or something.