Daisuke Matsuzaka made his second rehab start of 2012. He threw 4.2 innings for the AA Portland Sea Dogs. He threw 74 pitches (15.8 pitches per inning), 44 for strikes, 30 for balls. That's not a great ball-strike ratio, to be honest. But this is Daisuke we're talking about. He faced 17 batters, allowed 3 hits, walked 2, and struck out 7.

Two walks is great, and 0 runs is even better. But let's remember that these were AA hitters who aren't noted for their patience. The biggest struggle Daisuke has had in the Majors has been the patience of MLB hitters. How many of those 2 or 3 ball counts might have turned into walks against big league hitters?

I'm not saying this was a bad start. But these raw box score from it don't mean much, good or bad.

What matters is that there are no reports of pain or a setback.

The Sox could use another starter. And ironically, the return of Daisuke might help the bullpen most of all. Even though he needs considerable assistance from the bullpen, Daisuke's presence in the rotation means that one of the current starters could go out to the pen. That would be a significant boost.

No word yet on when Matsuzaka's next rehab outing will be.

Matsuzaka, in keeping with tradition, paid for the post meal spread. Which consisted of steak, ribs, and sushi (Source)

One team tied a series, another team took a commanding 2-0 lead. 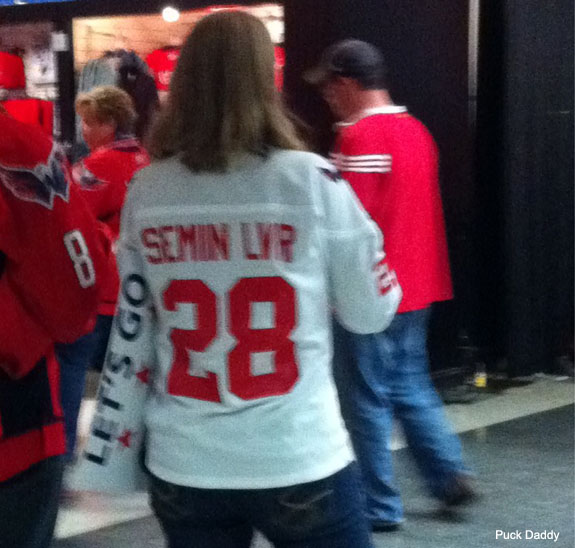 Ovechkin scored the game-winner in the 3rd period. Both teams managed a Power Play goal. This was similar to what the Caps did to Boston: Split on the road then hope to at least extend the series at home. I'll give Washington credit for hanging around and being tough to eliminate. And for being able to win games on the road. This is their 4th road win of the playoffs.

KINGS 5, BLUES 2 - (Kings lead series 2-0)
I have to give credit to the Kings. They've completely shut down St. Louis' Power Play (0 for 9 in this game) which was a big reason the Blues beat the Sharks. The Kings took a 4-0 lead in the 1st and never looked back. They didn't do much to add to the lead, though. Only 5 shots on goal in the 2nd and 3rd periods combined. The Blues didn't pepper Jonathan Quick with shots like they wanted to. This game got nasty at the end, and maybe that's what St. Louis needs to wake up.

I Don't Mind What Harbaugh Said

When someone first told me that Baltimore Raven's Head Coach John Harbaugh said something about the Patriots and SpyGate and asterisks, I got pissed. How dare he? That bastard!

Then I looked past the inflammatory headlines, and actually heard what Harbaugh said. And it wasn't that bad. Here's the quote:

"In the end, everything is brought before the light of day, when it’s all said and done. What happens, even the thing in New England, no matter whether those things had any impact on whether they won their championships or not, they got asterisks now. It’s been stained.

"To me, it’s never worth it. You have to figure out ways to use the rules to your advantage, you have to figure out ways to make the most of everything. We have new work rules here as far as what we can do and what we can’t do with our players, and we're going to make the most of it. What we're finding is, man, maybe we can do some things even better than we did before, because these rules make us focus more on some things that we didn’t focus on before. You just have to make them work for you. That’s what success is in the world. You have to find a way to do things better than somebody else. But if you’re cheating, in the end, you’re going to get discredited. It’s not worth it."

To me, as a Patriots fan, the key words he said are "...whether those things had any impact on whether they won their championships or not..." That's a qualifying statement. That tells us that he's not belittling the Patriots' Super Bowl wins, he's not saying they should have asterisks attached to those wins. He's talking about the perception of those championships. How some people view those championships.

And he's right. Many people do not think the Patriots truly deserved to win those titles. I disagree with them, but I can't deny that such people exist.

And these people are not just the Arlen Specters of the world, not just whiny Jets fans. There are people inside the NFL too. And Harbaugh would know better than any of us what the perception of those titles are in the League.

Harbaugh was being asked about the Saints, he mentioned New England as another example of a team that cheated (yes, the Patriots cheated, breaking the rules is cheating. I don't think it affected the outcome of games, but it was a violation of the rules). All he talked about was perception. He didn't talk about how HE saw Belichick and the Patriots. He talked about how Belichick and the Pats are seen by OTHERS. We knew it was coming. At least most of us did. Some Celtics' fans were hopeful it wouldn't.

I love Rondo. He has his haters here in Boston and I find them to be simpleminded. Trading a good point guard because he can't hit free throws? Or trading him because he's not the absolute best at his position (and not acquiring the absolute best to replace him)? It doesn't make any sense.

Rondo's haters are having a field day with this incident. "This is what I was talking about." His haters will also see his value tonight as the Celtics try to win a pivotal Game 2 without him.

I like Rondo, but he deserved this suspension. You can't touch an official. Period.

I love the arguments some Celtics' fans are making, about the poor quality of the officiating, and how that instigated Rondo's actions. That's just dumb. And what Rondo did was inexcusable, no matter how bad the refs were.

And shouldn't he and we be accustomed to seeing bad refs? Is this his and our first taste of NBA basketball?

Rondo acted like a child. The NBA hands out automatic suspensions for intentional contact with an official. There is little grey area here. Little room for debate. It sucks, but Celtics' fans really have no grounds for complaint.
Posted by rob at 11:00 AM No comments: 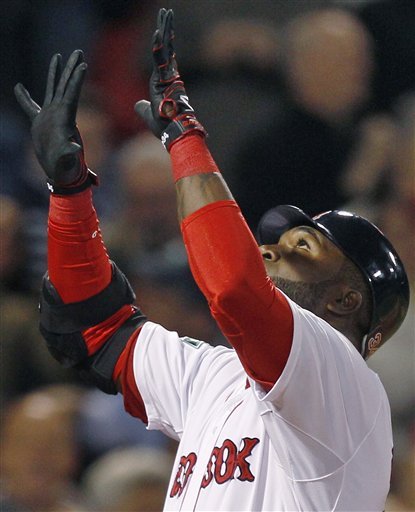 It's been feast or famine for Red Sox hitters this season, and last night David Ortiz and the lineup ate well.

Ortiz hit a pair of solo homeruns, raising his RBI total to 20. Aviles was 2 for 5 with a homerun and 4 RBI. Darnell McDonald was a triple shy of the cycle. Marlon Byrd was 2 for 4 with a double, and is now hitting .333 since being acquired from the Cubs.

Buchholz was fine until the 7th inning. He allowed a run in the 2nd, but it wasn't an ugly inning. He was crisp in the 3rd, 4th, 5th, and 6th. Then he just fell apart in the 7th. His pitch count was low to start the inning (72). He simply stopped throwing strikes. And his strikes weren't fooling anyone. He only threw 36 balls in the entire game, 11 were in the 7th.

Buchholz showed the promise of potential. We know what he's capable of. Then he collapsed. I think he should get 2 more starts to work out whatever it is he needs to work out. If he can't, then he needs to figure things out in Pawtucket.

Oddly, he's 3-1. Which demonstrates the meaninglessness of the W-L stat.

Felix Doubront is scheduled to face Jarrod Parker tonight. Parker has made 2 career starts in the Majors. The weather might not cooperate, though.