The Bruins have a rare thing in this day and age: depth. Not only depth, but flexibility. They can roll 3 excellent lines, and a solid 4th can take 10+ minutes per game without jeopardizing any leads. Those 3 lines feature a variety of moving parts that can be changed from one line to another as the situation dictates. Guys like Milan Lucic can play on the 1st line with the talented skaters, and on the 3rd line with the checkers. Byron Bitz can be a 4th line bruiser and a 2nd line presence in the crease.

Oh, the Bruins also have the Norris Trophy winner on the blue line, and the Vezina winner in net. That's always nice.

So let's start with Tim Thomas and the other netminders. This will be the first time in Thomas' NHL career that he is the definite #1 in net. He led the NHL with a 2.10 GAA and .933 SV% last year, and will likely reach similar statistical marks in 09-10. He'll only start about 50 games, giving 22 year old backup Tuukka Rask plenty of time as well. For the first time in a long time, the Bruins are all set in net.

The depth at Defenseman was tested in last season's playoffs. And it failed. When Andrew Ference and Matt Hunwick went down, too much was needed from guys like Steve Montador. The Bruins also lost Aaron Ward, trading him to the Hurricanes of all teams. They added 11 year veteran Derek Morris, who will be a decent 3rd tandem defenseman.

Zdeno Chara and Dennis Wideman might be one of the best defensive pairings in the NHL. Combined they had 32 goals, 68 assists, and averaged around 25 minutes of ice time. Wideman, who's only 26, was 6th in the NHL in +/- at +32. He's a bit sluggish at times, and occasionally makes groan-inducing mistakes with the puck, but he can only improve. And Chara is the team's big brother, a leader and a brawler and a scorer.

Rounding out the defense are Mark Stuart, Andrew Ference, and Matt Hunwick. Stuart's only 25 and showed a lot of promise last year. If Andrew Ference can stay healthy, he'll be solid, but that is a big "if." He hasn't played a full NHL season since 2005-06. And Matt Hunwick is poised to have a breakout season. The 24 year old became a presence on the power play and registered 21 assists. When his spleen exploded in the playoffs, the Bruins lost quite a bit. He can also play forward in a pinch.

The depth and flexibility the Bruins have in their forwards simply puts a smile on my face. Just thinking of all the different combinations is a fun little game for me.

Marc Savard led the Bruins in points last year. He helped make Phil Kessel a rich man, so I hope Phil sends Marc a Christmas card. Savard had 63 assists, but also scored 25 goals on his own. He's good for another 90 point season.

David Krejci wanted to remain a Bruin. He was a restricted free agent, but signed with very little drama. And he's a bit more versatile than Kessel. Krejci's 2nd line might be the best line to be on. When players slumped last year, they'd find themselves on Krejci's line and suddenly find their games. The 23 year old should be good to go on Opening Night.

Milan Lucic became a complete hockey player last year. He found himself shuffled from line-to-line, but that was because Coach Julien found him useful in a variety of roles. I like Lucic best on the 2nd or 3rd line with other checking players, instead of being on a line that's more about making plays. Lucic will never be a fancy player capable of the things guys like Krejci and Savard are. But he will score 20+ goals and once again be a YouTube star.

The Bruins have a little bit of age and wisdom on their side this year as well. They acquired Derek Morris, but also will bring 11 year vet Marco Sturm back, as well as 20 year man Mark Recchi. Sturm led the B's in goals in the 07-08 campaign with 27. Recchi scored 10 goals in 18 games for the B's last year.

Byron Bitz was introduced to the hockey world during the postseason. The 25 year old Cornell alum is 6' 5" and 215. And he plays bigger than that. He's a presence in front of the net, a force in the corners on both forecheck and backcheck, and a scrapper. He can be put on a scoring line with Savard and Sturm in order to take up space in the crease. He can be put on a checking line with Lucic and Kobasew and wear opponents down. Or he can be on a brawling line with Thornton and Begin and fuck people up.

Patrice Bergeron turned 24 this summer. It's unbelievable, right? He's been playing since 2003, has 300+ NHL games under his belt, and he's only 24. And he's going to have a breakout season. 08-09 was his return from injury year. He played great hockey, PJ Axelsson quality defensive play, great on the power play, even better shorthanded. But now he'll get that scoring touch back. He scored 31 goals in 05-06, and 22 in 06-07. He's got 20+ goal stuff and will help make up for the loss of Kessel.

Michael Ryder earned my respect last year. I was very doubtful that he'd amount to anything, but given the right linemates, he's a 25 to 30 goal scorer.

Steve Begin and Shawn Thornton are going to have too much fun together. I hope Begin takes a lesson from his predecessor: Stephan Yelle. The Bruins' 4th line was great last year not just because they messed people up, but because they weren't a negative on the scoreline. Shawn Thornton was -2, which is pretty good for a guy with 123 penalty minutes. Yelle was +6.

I'm not a fan of Blake Wheeler. But he did show sparks last year. He finished with a nice goal total of 21, but 14 of those came before the All-Star Game. He's not bad for a 3rd liner, but that's as high as I see him climbing.

Chuck Kobasew is last but certainly not least. His broken ribs in the Carolina series probably tipped the scales in Carolina's favor. The 27 year old BC alum from BC (British Columbia) scored 20+ goals each of the last two seasons. Look for similar production from him.

As I've said ad naseum in this preview, the Bruins have a great deal of versatility with their forwards. Julien is good at keeping things fluid, and matching the right guys together at the right time. Struggling players go with Krejci. Players in the groove go with Savard. Checkers and skaters mix together perfectly.

The Bruins led East with 274 goals. I think they will be around the 260 mark or higher, which will be more than good enough. The B's also allowed the fewest goals at 196. That number won't come up much. The Bruins will be either the 1 or the 2 seed in the East, winning the Northeast Division. They'll roll through the playoffs with purpose and win their first Stanley Cup since 1972.

COLLEGE GAMEDAY COMING TO BC 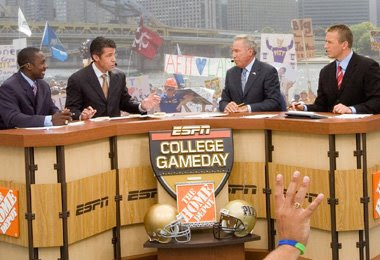 For the second time, ESPN's famous Saturday morning college football pregame show will grace Chestnut Hill with its presence. The show will broadcast from the Campus Green from 10 AM to noon, before BC's game against Florida State.

As a BC fan, and as someone who works at BC football games, I'm pretty exited about this. Exited, yet confused and surprised. #7 USC is playing #24 Cal in Berkeley. That's a big game. #4 LSU is at #18 Georgia, that's an even bigger game. #8 Oklahoma is at #17 Miami. That's a monstrous game.

Neither Boston College or Florida State are ranked.

But maybe this has something to do with BC football's anti-cancer campaign. I can't think of another reason to choose Chestnut Hill over Berkeley, Athens, or Miami.

The Sox can clinch a playoff berth Tuesday night with a win or a Rangers' loss, despite losing 11-5 to the Blue Jays on Monday.

The good news is that Beckett apparently was scratched as a precuation more than anything else. The Sox have all but secured their spot in the playoffs, so why risk Beckett? They're likely to skip his spot in the rotation, and have him start on Saturday.

Photo Credit:
AP Photo/Charles Krupa
Posted by rob at 1:51 AM No comments: