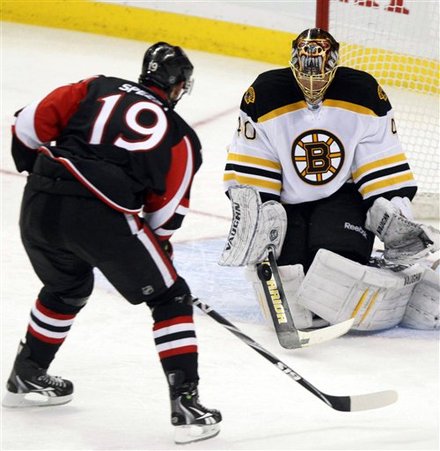 This had "trap game" written all over it. A game against a bad team sandwiched between big wins over the weekend and big games yet to come. Still, I'd like to think that since this was an obvious potential trap game, the Bruins would show up and play well. Or maybe have a shaky 1st period then settle down. Instead, they played about as well as Ottawa and escaped with a slim 1-0 win.

I must have forgotten who the head coach is. One of the things that's plagued this Bruins team under Julien is a false sense of achievement. Every hot streak seems to end with efforts like this one. Bland, uninspired, directionless.

I know, I know. A win is a win is a win. And six game road trips don't usually end with 12 points in the bank. Why am I being Robbie Downer? Because I've seen this pattern before.

A 6 game road winning streak is impressive. Until you remember that 4 of those games were against the bottom 3 teams in the NHL (Islanders, Senators twice, and the Oilers). The Vancouver win was impressive. The others were standard.

Then we get to last night. For the most part, the Bruins and Senators looked evenly matched. That's not supposed to happen against a last place team that's just traded away most of its roster. The Bruins weren't sharp, they weren't quick. They were indecisive, and they didn't skate. There were a few exceptions, like Horton, but it only takes one or two saboteurs on the ice at a time to slow things down.

We've seen it before, so many times. This team rips off a few wins, then they crap the bed. In the 2009 playoffs, they sweep Montreal, then beat Carolina in Game 1. They ease up on the throttle, allow Carolina to stick around, and suddenly they're on the losing end of a Game 7. And we all remember the Flyers series last spring. The Bruins' MO is to do well, get cocky and complacent, then let a near-death opponent cling to life. That works against Ottawa. It won't work in the playoffs against Philadelphia or Pittsburgh.

So the B's are 6 points ahead of Montreal, with a game in hand. They're tied for the 2nd seed in the East and have an unreal road record of 22-7-4. But I'm not convinced that they're much different from the chokers I've seen in the recent past. Not until they can go to places like Ottawa, give 100%, and outplay bad teams.

Being able to win at home would also help to make me optimistic. The Bruins have the best road record in the NHL, and the 21st best home record.

The next week is a good test for the Bruins. They host Tampa Bay on Thursday, then Pittsburgh on Saturday. They're in Montreal next Tuesday, and host Buffalo two days later. Some home games, some good teams, and then they'll probably lose a 3-2 game in OT to the Islanders after that.