Tom Brady's DeflateGate appeal should be televised by the NFL 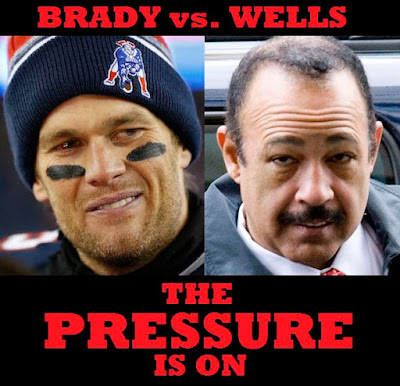 Tom Brady vs. Ted Wells. Face to face. The Rings vs. The Report.

Tom Brady's appeal of his 4 game suspension will be heard Tuesday morning. And how much would you be willing to pay to watch it? Would you rather watch this hearing or a crappy Thursday Night Football game? Think of the ratings potential for this 4 hour DeflateGate hearing.

Why the hell isn't the NFL broadcasting this?

I'm not joking. Not completely, at least. The NFL should put this on TV. Put it on a tape delay so the League can prevent sensitive information from being aired (and also so that info can be leaked to reporters from Indianapolis). Have a halftime show with analysts from football, law, labor relations, and science to break down the hearing. Then on Tuesday night, broadcast a condensed 60 minute version of the hearing. The ratings will be through the roof.

Look at what's on the NFL Network Tuesday morning: a show about LaDainian Tomlinson, something about Dwayne Bowe as a rookie, an episode of Hard Knocks from 2010, and a countdown of the best Brady vs. Manning games.

Brady vs. Wells would get better ratings than any of that. Everyone in New England would be glued to their TVs, along many more people across the country. You could stream it online so people could watch at work.

This could be to the NFL Network what the OJ Simpson trial was to Court TV. Players appealing the arbitrary disciplinary decisions handed down by the NFL could become regular programming. And with Goodell's office in charge of discipline, there would be no shortage of material. There could even be highlights of historic appeals, packaged like NFL Films, with slow motion replays and invigorating classical music playing while a deep voice narrates the action.

Vegas could take bets on the results of appeals (if they haven't done so already):

There could even be Fantasy Appeals Hearings, with lawyers, players, investigators, and arbitrators earning fantasy points. Think of what gambling and fantasy sports have already done for the ratings of NFL games. Add those elements to appeals hearings and you'll have high demand TV content 365 days a year.

This could be the biggest TV product created by the NFL since RedZone.