Major League Baseball will pony up the dough in order to compensate the Red Sox coaches and staff making the trip to Japan. The Red Sox started their final Grapefruit League game against Toronto about an hour late. They will board the flights for Japan as originally scheduled.

THE RED SOX ARE ON STRIKE

The Red Sox players voted unanimously to not go to Japan unless their coaches, training staff, and other support staff were compensated for the trip. Apparently, when this whole Japan trip was planned, the coaches were each promised a $40,000 stipend. Since then, it has been decided that they won't get anything for making the trip to Japan.

Furthermore, the Red Sox refused to play today's Grapefruit League game against the Toronto Blue Jays in Fort Myers. They simply stayed in the dugout.

As I'm in the middle of writing this, Extra Bases is reporting that the Red Sox will take the field at 1:10 and play their game against the Blue Jays. But there is no word yet on if the Japan situation has been resolved.

This is one of the few times at which I'm in support of a professional athlete's "labor" movement. The Red Sox are supporting their coaches, using the massive leverage they have as stars to help out the guys like first base coach Luis Alicea, who doesn't have much leverage in a matter like this.

Let's hope someone ponies up the couple hundred thousand for the coaches.

The Patriots defensive line did what it is supposed to do in a 3-4 alignment: not get noticed that much. They absorbed blocks well (particularly Vince Wilfork in the middle), created gaps, and allowed the linebackers an opportunity to make plays.

However, those defensive stats are skewed. The Patriots offense was so good and put up so many points early in games; that opposing offenses were forced to pass the ball. This allowed the Pats' defense to tee off on the quarterback, and play a pass-oriented defense.

The Patriots allowed 4.4 yards per carry on the ground, which was 26th in the NFL. That number is atrociously poor. And in close games, the opposing teams took advantage of this below average run stopping to drain the clock and get first downs on the ground.

The quality of a defense starts and stops with the defensive line. The Patriots' defensive line will look very much the same in 2008 as it did in 2007. Seymour and Warren on the ends, Wilfork in the middle, Jarvis Green coming in on the outside, and Mike wright (who recently signed a new deal with the Pats) backing up in the tackle position.

The Patriots lack a quick upfield rusher on the outside of the line. Seymour and Warren - both tackles in college - are good at holding up the offensive linemen, but neither possesses the speed to go upfield like a Dwight Freeney. Then again, very few linemen in the NFL posses that kind of speed.

I'd like to see more 4-3 played by the Patriots, especially with an ancient tedy Bruschi in the MLB spot. Jarvis Green was 2nd on the team in sacks with 6.5. Warren had 4, Wilfork had 2, and seymour only had 1.5 (although he missed considerable time with an injury). A front four of Green, Seymour, Wilfork, and Warren would be menacing. Green could rush hard off the end, and Wilfork could use his strength to plow through up the middle. 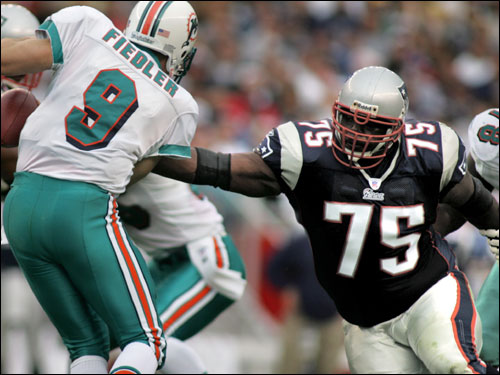 Adalius Thomas will probably see most of his time at OLB in 2008, and he too can come up and play defensive end. He tied for 2nd on the team with 6.5 sacks, and a full season on the outside should see that number increase. Mike vrabel can also play end should the need arise.

Overall, the defense performed solidly, but they didn't make the massive game-changing plays we've seen from them in years past. Seymour was mediocre in the games he played, which was a big part of this.

The likelihood of a suceptible defensive secondary is very high in 2008. But holes like that can be hidden with a powerful pass rush driven by the defensive line. The Patriots must figure out someway to get more pressure from the line in order to be succesful in 2008.

Sources:
Pro-Football-Reference.com
ESPN.com
Posted by rob at 12:59 PM No comments:

The OTHER March Madness, the one on ice, is entering its second phase this weekend. Last week saw BC sweeping Providence in 2 games, BU beating UMass-Lowell 2 out of 3, Vermont squeeze by Northeastern in 3 games, and UNH obliterate UMass-Amherst in 2 games. Now it's time for the Hockey East Finals and Semi-Finals, to be played at the TD BankNorth Garden. So if you want a little breather from basketball, check out the games on NESN. The Semi-Finals will be on Friday at 5 and 8 PM. The Final will be on tape delay Saturday night at 10:30.

Here is the bracket of the remaining teams:

Harvard is also in the semi-final of the ECAC tournament after blasting Quinnipiac by a combined score of 18-8 in three games. They play rival Cornell in Albany, with the winner advancing to the ECAC Finals against either Colgate or Princeton.

In order to make the 16 team NCAA Tournament, Harvard probably has to win the ECAC for the automatic bid, or make it to the finals and hope other games across the country produce perfect outcomes.

BC and UNH are probably already in the Tournament regardless of what happens this weekend, although the winner of the Semi-Final between them would be in much better shape. There's also the desire both teams have to play in the Northeast Region, held in Worcester.

Vermont is on the outside looking in, but not very far outside. A win against BU would go a long way to improve their standing, but they may need the automatic berth in order to make the tourney. BU is also just barely on the outside.

Late March is indeed the best part of the sports year. The college tournaments, the baseball season upon us, the NBA and NHL entering the playoffs, and the NFL draft coming up. Truly awesome time of the year.

Sources:
NESN
Hockey East
US College Hockey Online
Posted by rob at 9:33 AM No comments:

DEEP IN THE HEART OF TEXAS

Looking at this part of the schedule, Celtics fans may have cringed just a bit. Three games in four days against the Texas Triangle of San Antonio, Houston, and Dallas. But the Celtics have thus far shown that they are indeed the best team in the NBA.

After falling 22 points behind the Spurs Monday night, the Celtics rallied. They scored 82 in the final 3/4 of the game, triumphing 93-91. Pierce led the team with 22 points. Garnett had 21, Rajon Rondo had 20, and Sam Cassell added 17 off the bench.

But the road through Texas didn't get any easier. The C's had to take a 200 mile trip east to face the Rockets, who had won 22 straight. But a tied game at half-time was blown wide open in the 3rd as the Celtics opened up a 16 point lead. Paul Pierce once again led the team in scoring with 22 points. Garnett added 20 along with 11 boards.

The Celtics did all the things it takes to beat a tough opponent on the road. They outrebounded Houston 45 to 35. They got to the line often and went 15 for 17 from the charity stripe. And they got support off the bench. Leon Powe put up 21 points, and James Posey had 10 rebounds.

The Celtics have a well deserved day off, before travelling 240 miles north to face the Dallas Mavericks.

Photo Credit:
AP Photo/David J. Phillip
Posted by rob at 2:14 AM No comments: