When the Patriots got Adalius Thomas and Randy Moss in between the '06 and '07 seasons, I was excited. Thrilled even.

When the Patriots signed Adalius, my reaction was like this:
"In our 3-4 defense, Thomas is the perfect fit. The 3-4 is dependant on defensive linemen who can eat blocks and maintain the line of scrimmage, with fast and strong LBs behind them to exploit holes in pass defense, and plug holes in run defense. Thomas can do both of these jobs, very well."

This deal is amazing. The best part of it is that we don't NEED Randy Moss in order to be a winning team. Unlike Minnesota, who depended a great deal on Moss, and Oakland, which was a horribly run team to begin with, if Randy Moss doesn't perform to our expectations, he's gone, no sweat. And if he does perform up to expectations, holy friggin crap."

Nothing short of excitement with both acquisitions. And while Randy Moss was stellar in '07, and good in '08; Adalius Thomas has compiled maybe 7 or 8 good games in his time here.

This season was the last straw for Belichick and Thomas. He was a healthy scratch for the London game, and the whole "LateGate" thing should see him inactive until the season closes.

Some Belichick haters out there have already concocted conspiracy theories. Adalius is the NFLPA player rep on the Patriots, so some have speculated that there's labor-management tension between he and Belichick. Others have even suggested that Adalius leaked to the media the story of being sent home last week. So Belichick benched him out of vengeance. Right. 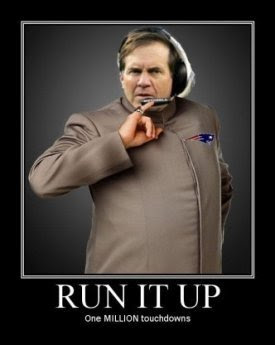 Adalius Thomas sucks. We were all blinded by his potential and raw athleticism. But Ray Lewis was right, he is a coward.

Randy Moss isn't too far behind Adalius. His apologists out there have defended his lollygaging on certain plays as a diversion, as part of a grand scheme to lull defenses to sleep. It might also be the effects of a nagging back injury. No, it's just laziness. If he's not getting the ball, he'll walk his routes.

If you ask me, Moss is already a lost cause. There's a distinctive pattern in his career. He starts off strong on a new team, then something gets under his skin, so he quits. He's a baby. Hopefully I'll be proven wrong, but once he starts tanking plays like he's done lately, he's never kicked it back into high gear until he's gone to a new team.

But unlike Adalius, at least we got something substantial from Moss.