APPARENTLY IT DOESN'T SUCK TO BU 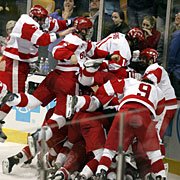 The Boston University Terriers plowed through UNH 9-2 then squeezed by arch-rvial Boston College in the Hockey East finals in overtime 2-1 in order to claim their first HE title since 1997. The win also helped BU to move up to #1 in the national polls.

Two more Hockey East teams made the NCAA tournament. Maine will play Harvard in Albany. Also in Albany, UNH will face Michigan State. Two more Massachusetts teams made the tournament. The afore mentioned Harvard and Holy Cross, who will be facing off against Minnesota in Grand Forks, ND. Overrall, that makes for 6 out of the 16 participants in this year's tournament teams from New England. There are six teams from the Great Lakes area, one from Colorodo, one from Nebraska, one from North Dakota, and one from upstate New York. Can you see why college hockey hasn't caught on nationally?

The Red Sox have traded Bronson Arroyo to the Reds for outfielder Willy Mo Pena. Many people felt that the Red Sox were going to trade one of their starting pitchers because they simply had plenty of them to trade. Wells probably would have been the most desireable for the Sox to trade, but he was also the least tradeable.

Arroyo is 29 and had never really blossomed into the frontline pitcher many in Red Sox Nation had hoped he would. He went 24-9 in his 3 year career in Boston and was an impressive 10-2 in the post-season. However, his ERA in the post-season tells a different story, it is 7.41. Last year, Arroyo's ERA was 4.51 and the year before was 4.03. He showed signs of brilliance in his first few outings of 2005, including a brush with a no-hitter against the Tigers. However, as the months progressed, his ERA gradually went higher and higher. Arroyo's struggles continued in Spring Training.

Willy Mo Pena is 23 years old and has experience at all outfield positions. Last season he hit .254 with 19 HRs in 99 games. I think he'll be a solid bench player with pop and defensive versatility. We needed a 4th outfielder, especially with the injury prone Trot Nixon out there, and Willy Mo is it. He's got some upside with 45 HRs in the past 2 seasons, both in limited playing time.

I think this deal almost had to be done. The Red Sox had a lot of starting pitching and needed some depth in the outfield. The way I look at it, the Red Sox traded a reliever for a 4th outfielder.

I think Willy Mo will see some time in the outfield as a defensive replacement for Manny late in games, as a pinch hitter for guys like Gonzalez, and as a right handed semi-platoon player to spell Nixon against tough lefties like Randy Johnson. His depth should add a good deal to this team and he probably won't be clamoring too much for extra playing time.

The Red Sox have also offered an invitation to camp to Juan Gonzalez. The 36 year old has struggled to stay healthy over the past few years, playing in only 1 game last year and 186 over the past 4 years. That's only about 47 games a season. Again, the Red Sox need outfield depth. This is a chance to get it without giving up much. Gonzalez's career numbers speak for themselves (.295 BA, 434 HRs, 1,404 RBIs). If he can be healthy and come off the bench with some pop, then he'll be worth a shot.

I'm sorry I haven't been posting that much over the past few days. With March Madness and St. Patrick's Day, I've been somewhat busy. I'll have summaries on the Red Sox in Spring Training, the BC Eagles in the NCAA tourney, and the Hockey East tournament as well as the Celtics who are only 3.5 games out of a playoff berth.

Also, I'm not getting paid for this, but see the movie V for Vendetta. It is awesome.
Posted by rob at 12:47 PM No comments: