It's time for the European Championship of soccer. I think I like this tournament a little bit more than the World Cup. Most of the best teams in the world are in it, and you don't have to bother with separating the wheat from the chaff. There are also some really interesting and intense rivalries that this tournament is more likely to see than the World Cup. England/Germany, Germany/Netherlands, Spain/Portugal, France/Italy, et cetera.

This year, the tournament is being hosted by Poland and the Ukraine. There are four teams in four groups. They'll play a round-robin round, with 3 points awarded for a win, 1 for a draw. The top two teams advance to the elimination stages. Here are the groups:

This is the Eastern bloc group. Greece and Russia are the highest ranked teams, according to FIFA. But the Czech Republic side isn't bad. And Poland, being a host country, is sure to be energized and also receive benefits from a few calls. I think Greece's political problems might wind up distracting their team. And Poland will take advantage. Russia wins the group with Poland squeaking through in second place. 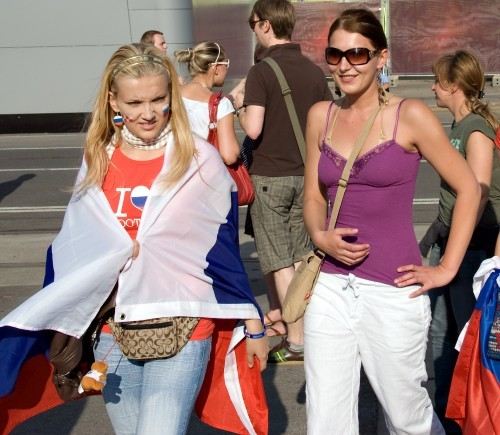 This is the "Group of Death" for the tournament. Germany is ranked 3rd in the world, the Netherlands are ranked 4th, Denmark is 9th, Portugal is 10th. That's in the world, not just Europe. I can't not pick the Germans to win this group. They're very talented this year, and they always seem to play above their talent-level anyway. And the Dutch have so many guys that can make plays and score, it's hard to pick against them. So Germany wins this group, the Dutch come in second.

Ireland is a darkhorse to advance from this group. If Spain and Italy draw each other, then one of them draws with Ireland, and maybe Croatia upsets Italy (who tend to occasionally show up to summer tournaments in lackluster form), Ireland could advance. It's possible, but unlikely. What's more likely is that the #1 team in the world (Spain) dominates this group. And Italy dominates Ireland and Croatia to finish 2nd.

This is a tough group. There's a host country, then England (#6 team in the world), France (#14), and Sweden (#17). France and England both have a history of disappointing in big tournaments. So when two chokers face each other, what happens? A draw. I don't know if the Ukraine is good enough to capitalize on some friendly officiating, but Sweden could sneak into the elimination round from this group. I think England wins the group, Sweden finishes 2nd.

Notice how only two of those girls are showing their teeth? That's England for you.

If my predictions come true, then here would be the quarterfinals:

Russia vs. Netherlands
The Dutch would roll in this one. That's a feeble joke about rolling joints.

Spain vs. Sweden
This is as big of a mismatch in soccer as it is in hockey. Spain is too good to be stopped by the Swedes.

Germany vs. Poland
The best Polish born player in the world is a German citizen named Miroslav Klose. Germany wins.

Then the semifinals:
Spain vs. Netherlands
The Dutch upset the Spanish with some quick strike goals.

Germany vs. Italy
The Germans outwork the Italians and win in extra-time or a penalty shootout.

Then the finals:
Germany vs. Netherlands
My heart is with Germany, but I have a feeling that the Netherlands will win it all. 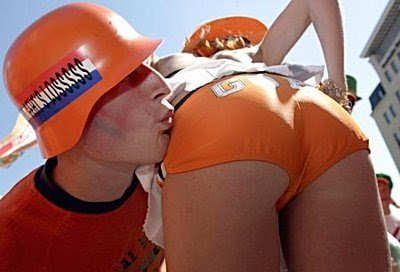 The tournament starts today on ESPN. I highly recommend checking it out if you get a chance. This is world class soccer, something we don't get to see much of in the US. 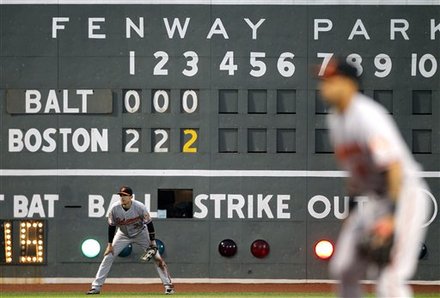 The Sox, having lost 3 straight, needed a good start from Buchholz and some production from their offense. They got both. Buchholz went the distance, allowing 4 hits, only walking 1, striking out 6, and shutting out the Orioles.

Over his last three starts, Buchholz has pitched 24 innings and allowed 4 runs (1.50 ERA). He's striking batters out, he's getting them to ground out (he induced 3 double play balls last night), he's finally pitching as well as his 6-2 record suggests he can pitch. He's no longer a worry in the rotation.

Brian Matusz struggled to throw strikes, and the Sox took advantage. They drew 5 walks off him. And were up 4-0 by the time he was pulled in the 3rd. If anything, they could have scored more runs off him. But I'll take the 7 runs and the win.

Nava and Gonzalez each knocked in 2 runs. Pedroia and Youkilis each had an RBI.

This was the first time the Sox beat the Orioles in Fenway Park since September 19, 2011. Brian Matusz got the loss that night as well. I'm glad that shameful streak is over.

The good news is that the Sox didn't fall below .500. And the great news is that Buchholz is pitching extremely well. Right now, I'd say that Buchholz is the best pitcher in the rotation, with Beckett a close second. Doubront would be a solid third. If Lester could get going, then the Sox could start to scare opponents. Beckett, Buchholz, and Lester all at their best are quite formidable. Add Doubront's solidity, then Daisuke's potential to be a quality 4/5 guy, and the sky is the limit.

The Sox bats will be challenged this weekend as the 1st place Washington Nationals come to Fenway. Doubront faces 6-1 Stephen Strasburg tonight.. Strasburg has a 2.35 ERA and a 1.05 WHIP. Although he has had a shaky May.

Celtics Will Have to Take Their Talent to South Beach 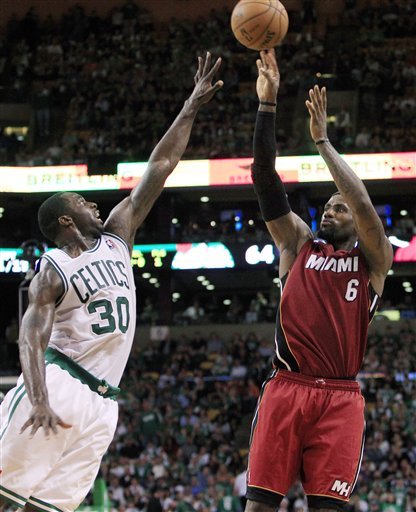 LeBron James is smart. He realized that the best way to avoid choking in the 4th quarter was to shoot the lights out in the first three. He hit 11 of his first 12 field goal attempts, finished 19 of 26 (73.1%), scored 30 points in the first half, and 45 points overall.

And he wasn't hitting easy shots. He was contested, fading away, and he still managed to sink it. Give him credit for having a great game.

Most of the Celtics, on the other hand, did not have a great game. Pierce was 4 for 18 from the field, and only managed 9 points. Rondo led the team with 21 points, but only had 10 assists. Which is an indicator that his teammates were struggling to sink shots. Garnett finished with 12 points. He shot 6 for 14, and never got to the free-throw line. Bass was the only Celtic who truly had a good game. He scored 12 with 7 rebounds.

Ray Allen hit the only three-pointer for the C's, who were 1 for 14 in that department. The Heat, meanwhile, were 7 for 16 with their three-pointers.

The Celtics defense was sluggish and predictable. But at some point you just have to tip your cap to LeBron for making the shots he made.

Offensively, the C's reminded me of the Bruins' power play. One or two guys moving, everyone else stationary. At first, the Celtics took advantage of Miami in transition. Then they slowed down. Then they slowed down, but took mediocre shots with 18 seconds left on the shot-clock. The Celtics never got into a rhythm offensively, and never really seemed to try to get into one.

The Celtics love to do this. They win 3 games in a series, then they take their foot off the gas. There were spurts of energy in this game. Rondo doing pushups was a great moment. But energy is only good if it's maintained throughout the course of a game. If it's sporadic, then it's essentially useless.

There wasn't much that the Celtics could do to silence LeBron, but they could have at least answered on the offensive end. Too many possessions ended with weird turnovers and missed shots.

The Celtics simply didn't play very well last night. Pierce and Garnett had off nights. Rondo was good, but he can't do it on his own. And without KG and Pierce, this team can't hope to win playoff games.

Hopefully they all wake up in Game 7. To me, they had a golden opportunity last night, and they blew it. Now they have to go down to Miami, deal with officials who are swayed by the crowd, and beat the Heat on their own floor. Again. At least they've shown that they can do it.