THE SHOE'S ON THE OTHER FOOT 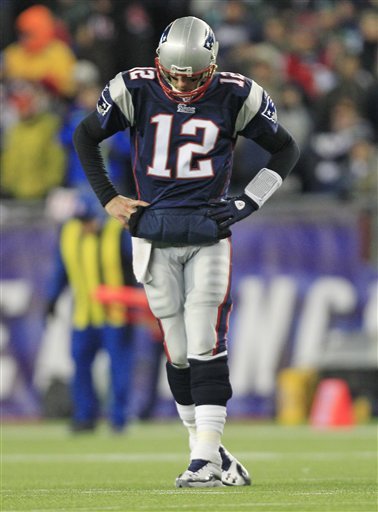 The Jets made the plays, the Patriots didn't. It's amazing how simple the game of football can be. Santonio Holmes made a stupendous catch in the end zone, Alge Crumpler dropped what should have been a touchdown. The Jets took care of the ball, the Patriots took chances. Meanwhile, the Patriots are working on a 3 game playoff losing streak.

I blame the offense, first and foremost. They only mustered three quality drives, apart from the garbage time touchdown. And of those drives, they amassed 11 points. The Brady interception was simply careless, maybe even a bit cocky. Pace got his hands up, Brady had to throw at a higher trajectory, but still wanted to force the ball to Green-Ellis. The next drive saw Crumpler drop a score. Instead of being up 10-0 or 14-0, it was 3-0 Pats.

You can't lose a game in the 1st quarter, but you can win it. By building a lead, you can force a team to alter their simplified gameplan. You can force their young quarterback to take more chances. But by keeping the score close, you allow them to do whatever they want. The Pats missed an opportunity to change the shape of this game with those early squanders.

Let's talk about the fake punt. I don't like the decision. The execution failed, but the decision was a bigger failure.

After the game, Mesko and others claimed that Chung had the discretion to call a fake if 8 Patriots lined up against 6 Jets. Maybe that's true, maybe not. If true, I disagree with the notion of 2nd year defensive back having so much decision making power. Especially a player out of Oregon, where they make decisions like this:

If the call came from Belichick, I also disagree with it. The reward is too minimal to justify the risk. If thwarted, the Jets get the ball only 10 yards from field goal range. If successful, the Patriots get another set of downs around midfield. Big whoop. If I have one criticism for Belichick, it's that when things aren't going smoothly, he tries too hard to win the game with his coaching decisions.

The failed punt fake wasn't technically a turnover, but for all intents and purposes, it was. And it allowed a 7-3 game to dramatically change at 14-3, right at halftime.

The Patriots offense finally figured out how to function, but it was late in the 3rd. Sanchez and the Jets responded with some big plays, and a touchdown. I heard some post-game show on CBS criticize the Pats' defense for failing to come up with a timely stop. But hadn't the defense done enough?

And after Holmes' catch, the Pats put together a 7:45 drive that produced 0 points. Branch dropped a 4th and 13 pass that would have sustained it.

Speaking of Branch, he needs to shut up. He was jawing with the Jets' sideline too much, and now he's whining about post-game celebrations. Leave that kind of crying to the likes of LaDainian Tomlinson.

And speaking of talking, I don't mind Belichick sitting Welker for a series. Did Welker's foot jokes cost the Patriots in the game? No. But it didn't help them. And Belichick's philosophy has always been, if it doesn't help, it's not worth doing.

Anyway, after that 8 minute drive (the Jets couldn't have done a better job of killing the clock than the Patriots did for them) the game was over. Once again, the Patriots didn't perform on the big stage. The last four years, they've gone 51-13 (.797) in the regular season, 2-3 (.400) in the postseason.

On the bright side, the offense should remain largely intact for 2011. The Patriots have rediscovered a running game, and that's no longer a glaring need. The defense came into their own, and this was one of their better games of the season, considering how many bad situations they were put in. The D-Line needs depth. The pass rush needs to be bolstered, and more consistent. Part of LT's TD catch was due to the Pats bringing 5 guys on the pass rush, including Ninkovich, which vacated the flat for Tomlinson.