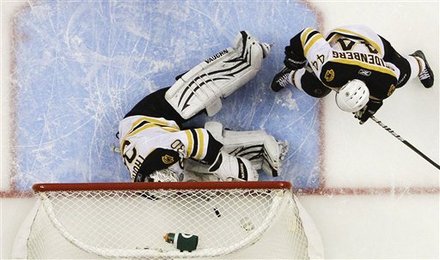 The Bruins have allowed 6 goals in 5 games, they're getting stellar goaltending from Tim Thomas, outstanding defensive play, an unbelievable penalty kill, and they're down 3-2 in this series. Why? The defensive designs of Claude Julien are being executed well by Chara, Seidenberg, Ference and McQuaid. Boychuk's also improved compared to last series. And of course, there's Thomas. These guys are doing exactly what they need to do to put this team in a position to win. 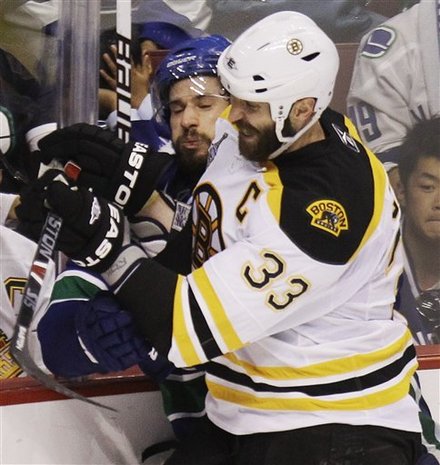 But the offense is missing. The Power Play sucks, only looking good in that 8-1 drubbing that saw the Bruins dominant no matter what the manpower situation was. Kaberle doesn't deserve PP time, let alone the 4:08 he got in Game 5. He has no shooting ability. His passes only compound one of the Bruins' biggest problems on the PP: they pass the puck too much instead of moving bodies.

I'd rather see Boychuk out there (0:00 PP time in Game 5), as he actually has a decent shot that other teams need to respect. He moves his feet, he's physical.

And I'd like to see Bergeron and Recchi playing in the high-slot, almost in between the two defensemen (or even replacing them, especially replacing a pinching Chara). These guys can shoot from up there, they can drive to the net, they can force the Canucks to either defend high or low. Peverley would also be a good guy to have up there. He might be the best net-driver on the team.

And why no Seguin? He's the most offensive-minded player, the most naturally talented shooter on the team, he can pass, he can skate, he's always moving with or without the puck. 0:12 of Power Play time in Game 5. Why? Why doesn't Julien get interrogated for that?

The Bruins had three Power Plays in the 1st period. Those were golden opportunities to get ahead, to instill some doubt in Luongo, and maybe most importantly: to make Vancouver think twice about physical play. The Canucks matched then surpassed the Bruins in physicality Friday night. They out-hit the Bruins 47-27. And in the 1st period, they were a bit too eager to play physical. Torres tripping Campbell, Sedin punching Boychuk in the back, Alberts going after Thornton. These were all stupid penalties, and had the Bruins made them pay for them on the scoreboard, some Canucks might have eased off the physical play for the rest of the game. 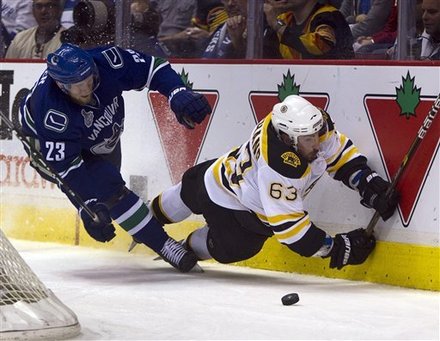 But they didn't. They continued the intensity and were the better team. The Bruins hurt their own offense with giveaways. Every time Krejci tries to toy with the puck by the blue-line, I get nervous. He really needs to learn the geography of the ice. You can do that fancy crap deep in the zone, but not by the blue-line. Location, location, location.

Ryder went from having one of his strongest games in Game 4, to one of his weakest. That's been a theme for him in this series, in the postseason, in the regular season, in his career.

Kaberle doesn't deserve to dress. Dress Hnidy, or Kampfer, and play them in an emergency. He's awful. He's a negative influence on all aspects of the game. He was born to be a Maple Leaf.

This was a great opportunity to win the series. Had the Bruins won out there, I have no doubt that they'd win the Cup. Now, the task in front of them is pretty tough. They had Luongo on the ropes, but allowed him to build confidence in that 1st period, and now the overrated, greasy, Quebecois prima donna is feeling cocky. Here's what he said about the goal Thomas allowed:

"It's an easy save for me, but if you're wandering out and aggressive like he does, that's going to happen. He might make some saves that I won't, but in a case like that, we want to take advantage of a bounce like that and make sure we're in a good position to bury those."

Wow. A goalie criticizing another goalie. Goalies are in a unique brotherhood, they're all comrades out there, even on different teams. You remember that farcical "fight" between Thomas and Price? Thomas and Rask, despite being in direct competition with each other, are buddies. But Luongo's arrogance goes beyond the Fraternal Order of Goaltenders.

Luongo tried to qualify his remarks the next day:

"I said he might make some saves that I don't. I was just saying, on that particular play, I would have played it different. That's the difference between me and him. I have been pumping his tires ever since the series started. I haven't heard one nice thing he had to say about me. That's the way it is."

So has Roberto been spending his off-days scouring the media for Tim Thomas saying nice things about him? Thomas' response to this sums up how much more character, quiet confidence, and sheer dignity the Bruins goalie has compared to his counterpart:

"I guess I didn't realize it was my job to pump his tires. I guess I have to apologize for that. I still think I'm the goaltender on the union side and I stick with all the other goalies. In being one and knowing what it takes to perform at this level and with this amount of pressure, I understand to a certain extent what every other goaltender is going through. I guess that's that."

There's just so much not to like about the Canucks. I didn't hate them before this series, but I guess that's because I didn't know them. Burrows' biting, then his trying to draw a call by stepping on Lucic's stick. The Aaron Rome hit on Horton. The Sedin twins falling down with ease. Maxim Lapierre's taunting. Pretty much everything Lapierre did in Game 5. His dive was vintage Canadien. Once a Hab, always a Hab.

It's gone beyond wanting to see the Bruins win. An extra incentive would be to rob these Canucks of glory. Game 6 tonight in Boston.