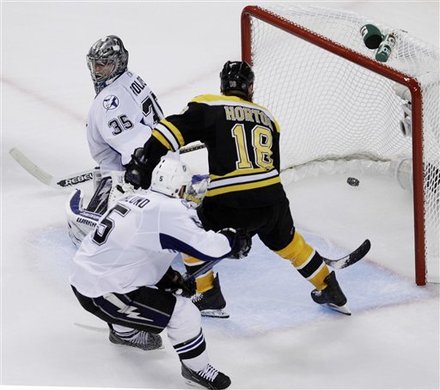 Surreal (adjective): Having the disorienting, hallucinatory quality of a dream; unreal; fantastic.

When the puck grazed against the blade of Nathan Horton's stick, and softly slid into the net, all the theories, all the "what-ifs" came into focus as reality. What I mean is, after years of wondering what it would be like to watch the Bruins in the Stanley Cup Finals, it's all become real. And the reality of it is so surreal. 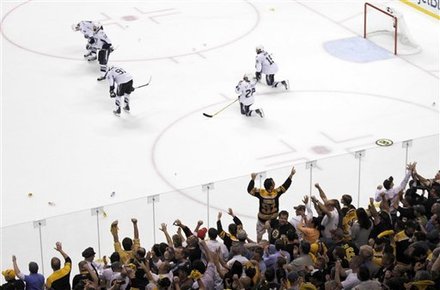 Up until that goal, my nerves were frayed and tattered. There seemed to be some invisible force working against the Bruins. Brad Marchand came within millimeters here and there of a hat-trick in the 3rd period. The Bruins were playing the better game, but pucks weren't going in. They weren't even getting to the net.

Then the puck went in. It wasn't a magnificent play. It was just smart. Smart entry by the Bruins against Tampa's 1-3-1. Ference waited until he was close to center-ice and challenged by Tampa's frontman in the 1-3-1. Both Krejci and Horton were on the far-side boards. This was a 2-on-1 for the Bruins caused by the shape Tampa's formation. Two men attacking the area guarded by one. Krejci entered the zone with the puck, and was engaged by the final man or "strong safety" of the 1-3-1. As Krejci carried straight toward the corner, Horton cut inward to the net. Through the slimmest of lanes, Krejci passed to Horton.


It wasn't ingenious. It wasn't that tricky. It was smart. It was executed well. And it took advantage of minor mistakes made by Tampa's defenders. Horton was allowed to get position, Krejci was allowed entry without any harassment. In short, the Bruins couldn't have done better on the play, the Lightning could have done slightly better. And that's hockey. The difference between two teams in a 7 game series can be the fraction of a second that Krejci's pass window was open.

And for the next 7 and a half minutes, I was supremely confident. The game was over. If I were Red Auerbach, I would've lit a cigar. I was more confident in that 1-0 lead than I've ever been with any 3 goal lead the Bruins have ever had. After going up, they played even better. They kept attacking, kept fore-checking. They valued possession of the puck, made Tampa Bay fight to win it back, made the Lightning carry it 200 feet each time. It was a thing of beauty.

None of the Bruins had amazing individual nights. And that's why I enjoyed their effort so much. Thomas didn't have to stand on his head. Chara didn't have to throw people around all night. Seguin didn't need to break anyone's ankles. Everyone did their job. Everyone played well. Horton wound up with the goal, Krejci and Ference with the assists, and Thomas with a shutout, but no superhuman individual feats were necessary to win. The whole team showed up, guys like Peverley, Ference, and McQuaid were just as important as Krejci, Chara, and Seidenberg.

And it was also nice that the refs didn't call any penalties. Keeping the game 5-on-5 was a huge edge for the Bruins.

And now, for the 18th time, the Bruins are in the Stanley Cup finals. It's surreal how real this dream feels. 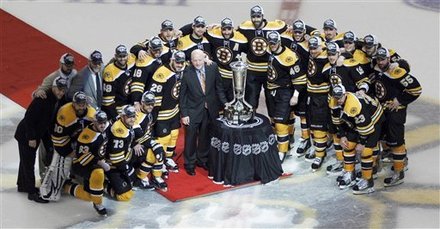