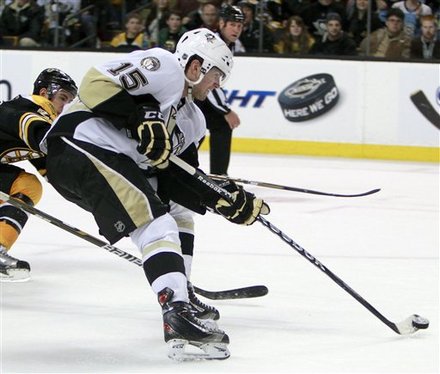 Saturday night's game against Pittsburgh was very much like a postseason game. That's how Pittsburgh's been playing. They're winning without Crosby, without Malkin, because their roster is full of battlers. And despite what Mario Lemieux might think, they even have one or two dirty players. But they're all tough. And they make everything tough for their opponents.

The Bruins didn't play too poorly on Saturday. Boychuk's giveaway was foolish. The defensemen have to get involved for the offense to work, but committing to a loose puck around the blue-line is wise. Big risk, little reward. That's only one glaring error, though.

The Bruins didn't play great on Saturday, either. The Penguins contest everything and that exposed some weaknesses in the Bruins' game. They struggled breaking the puck out of their zone. They gave it away in bad locations. The power play didn't move bodies around enough.

Then there was the effort levels. The Bruins weren't lazy, but which team would you say put in the most effort? The Penguins. And Pittsburgh played an overtime game Friday night. So why are they able to play 62 minutes with more energy than the Bruins?

I'll take the point, but for me, this is the pre-postseason. In the playoffs, the Bruins will be seeing motivated teams like Pittsburgh EVERY GAME. Do teams like the Penguins have guys like Michael Ryder loitering on their roster? Nope. They have leaders. More importantly, they don't have followers. The Penguins have won 37 postseason games the last three years. The Bruins have won 17. On Saturday, I think we saw why there's such a disparity. The relentless effort.