Bruins Squeeze Out a Point 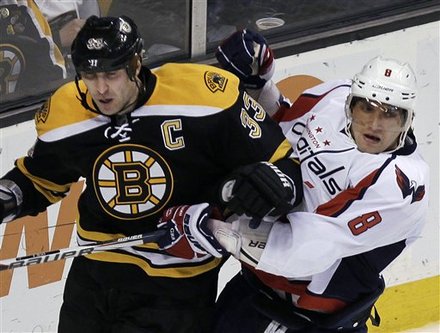 You have to admire the Bruins' resiliency in this game. It wasn't a pretty game, and the Bruins didn't play all that well, but they were able to score two late goals in the 3rd to tie it and earn a point.

It's the type of character that until recently was lacking with this team. About a week ago, if the Bruins fell 2-0 down, that was it. But now, they're able to make something out of nothing.

Hopefully Seidenberg will be back Saturday. Corvo just doesn't fit in. He's not a liability like Kaberle was. But he hasn't done anything to really be a Bruin.

McQuaid left the game in the 1st period. The Bruins are saying that he wasn't acting like himself. And that's worrisome. Hopefully he recovers today and does act like himself. The Bruins will need him in the playoffs.

Bruins play the Islanders on the road Saturday. They need 1 point to clinch a playoff spot.
Posted by rob at 10:00 AM No comments: