Why is Tuukka Rask starting tonight? 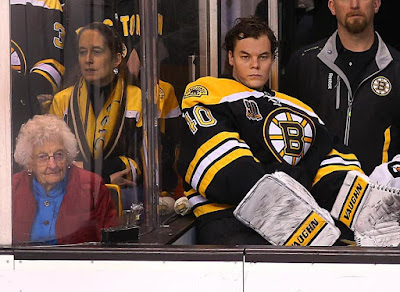 You can't say anything negative about Rask without qualifying your remarks, or risk the scorn of his many defenders. And I don't know why. His play has been shabby and lazy this season. In his career he's never come up big in a playoff series when the Bruins have needed him to. His play was one of the primary reasons the Bruins lost a 3-0 series lead to the Flyers in 2010. And the best thing to happen to the 2010-11 Bruins was Rask losing the starting job to Thomas.

But let's limit our scrutiny of sacred cow Tuukka Rask to October of 2015. And let's also not talk about his play as a percentage of the blame pie for the Bruins' struggles. It doesn't matter if he's only 10% responsible for the B's losses, or 5% or less than 1%. His quality of play is what matters, and it's below the standards of an NHL goalie, let alone one of the allegedly better goalies in the League.

He's been lackadaisical, imprecise, passive. He cuts off angles incorrectly, he handles the puck awkwardly, and his form has been allowing pucks to leak through. He's done the bare minimum of his job. He's not the cause of the Bruins' losing, but he's not doing much to cause them to win.

The Bruins have 3 wins this season, 2 of those were with Gustavsson in net. I'm not saying the B's should trade Rask, or permanently put Gustavsson ahead of Rask on the depth chart. But Rask shouldn't be starting right now. Send Rask a message and play the goalie who is giving you 100% and winning.