Ozzie Guillen is being punished for expressing an opinion. Which sounds like something that would happen in Castro's Cuba, and not the Free World. Obviously as a private entity, the Marlins have the right to suspend Guillen. Guillen's remarks have incited a PR nightmare of Biblical proportions. Expressing admiration for Castro in Miami is like going to Tel Aviv and praising Hitler's public works projects. It's a really stupid thing to do.

So where's the rest of the tangent?

Time Magazine has the full story available online, but only to subscribers. And I don't subscribe to Time. Why would I?

And every other paper, blog, cable news site, pundit pool and sports radio station only features the "I love Castro," part of the quote. Then the writer takes over with their opinions about Guillen, Castro, Cuban-Americans, the Marlins, and so on.

"I love Fidel Castro... You know why? Many people have tried to kill Fidel Castro in the last 60 years, yet that [SOB] is still there."

It doesn't seem so horrific now, does it. It's just a stupid thing to say.

And did he say it in English or Spanish? Why is nobody asking these questions before they spit out their opinions one way or another? Are we so addicted to outrage in this country that we don't ask questions, we just get pissed?

The Marlins have been inundated with complaints, protests, and boycotts from the Cuban community in Miami. Understandably so. These are people who were forced out of their homeland by Castro. And people who still have relatives living under Castro's regime.

Will a 5 game suspension ease their anger? Maybe for a day. But their real anger is at Castro, not Guillen. And at the end of the 5 game suspension, Castro's still alive, and Guillen's job is still to manage a baseball team. Which is more important?

Ken Rosenthal wants a month long suspension. Wow. Because that's what we do in America? Lobby for people to be punished as harshly as possible for saying something stupid? This is the same guy who in 2008 insinuated that the Red Sox were a racist club because they had so many white players. He then back-tracked and tried to explain his remarks. I wonder if Mr. Rosenthal was clamoring for his own suspension back then for saying stupid stuff.

I really think after this media firestorm that Guillen will not talk about Castro ever again. He's not an idiot. A 5 game or a month long suspension isn't necessary to shut him up. His own common sense and desire to manage a ballclub will give him some self-censorship.

Getting Ozzie Guillen to sincerely apologize about anything is enough for me. He's not the apologizing type. If a 5 game suspension will quiet the enraged masses, then that makes sense for the Marlins. But this whole story is why I hate the media. Three words, no context, and suddenly Guillen is a pro-communist villain.

It's disgusting. And if we read about something like this happening in Cuba we'd all say "Thank God we don't live there. We live in a free country."

Sox Pull the Goalie and Score in Toronto 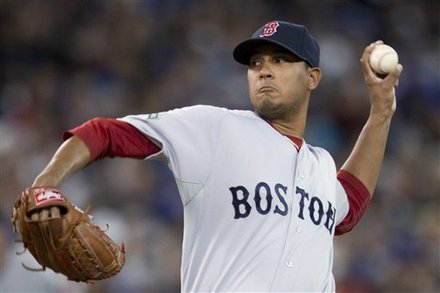 The Sox finally put that first win in the books thanks to a 3 run 9th inning last night in Toronto. And finally, the pain is being felt by another team.

Felix Doubront did his job. That's something that Beckett and Buchholz didn't do. Doubront's 5 innings of 2 run ball gave the Sox a chance to win. It was an undramatic start that allowed the Sox to end the game dramatically.

Dustin Pedroia is my favorite player on this team. He started the 9th inning rally with a leadoff double. He also hit a solo homerun in the 6th. It's not just about overall numbers for him, it's when he gets the hits. He's the guy you want at the plate when you need a big hit to start a rally.

This season looks like it might be a bipolar roller coaster. Tremendous highs followed by horrifying lows.