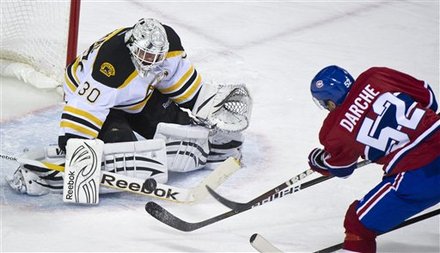 I was a little puzzled by Claude Julien's decision to start Thomas in back-to-back games. But he was 6-2 in his previous 8 starts before last night. Meanwhile, Rask had lost 4 straight, including that 6-0 Buffalo debacle. Thomas also had a 1.26 GAA against the Canadiens and a .964 SV% this season. So that's probably why he started.

It was how he finished that was most impressive. He's undefeated in shootouts this year, and he was stellar in last night's.

The Canadiens are a team in disarray. 6 points behind Toronto for the last playoff spot, with 3 teams to leapfrog over. They don't have a team identity, they don't seem to have any sense of direction. Are they a finesse power play focused team, or are they defensive and opportunistic? It's a little of both, but not enough of either.

The B's took advantage of Montreal's attempt to copy the Rangers by giving up the points on defense. The Habs collapsed and allowed the Bruins' defensemen plenty of time and space to shoot. Eventually Ference took advantage and scored.

The Bruins got careless and lackadaisical at times. That's how Montreal scored their shorthanded goal.

The 3rd period was especially unfortunate for the B's. They tried to play a prevent defense and run out the clock, and there's just no such thing in hockey. Montreal took advantage. The most painful play was Chara's giveaway a few feet from Thomas.

Chara looked out of sorts all night after taking a puck to the chin. And how about those high and mighty Montreal fans applauding his injury? These are the same rabid jerks that complain about hockey not being played the right way. Stay classy, les scum.

The Bruins dominated overtime, though. Seguin froze Carey Price in the shootout, and Tim Thomas did the rest.

This team is having it's good stretches and bad stretches. They haven't strung together 60 minutes of good hockey for a long, long time. But the capability is there.

Hopefully Thomas can re-find his groove. And Marchand is a few posts and crossbars away from scoring a few goals lately.

The Bruins are in Winnipeg Friday night.