Chicago Kane, They Shaw, They Crawford 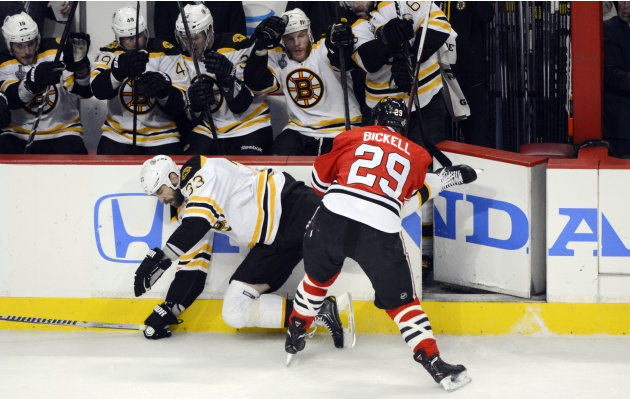 Were the Bruins ever the superior team in Game 5? Apart from a brief series of plays in the 1st period, the Bruins rarely imposed their will on offense. They didn't move the puck well through the neutral zone. They weren't able to string together successful puck battles. And defensively they were sluggish and late. If not for some brilliant stops by Tuukka Rask, the Bruins would have lost this game by 4 or 5 goals.

Is Zdeno Chara out of gas? Has playing 30 minutes a night taken its toll? Maybe Chicago's Bryan Bickell is starting to chop the giant down. Bickell has focused on Chara all series, pushing Chara's buttons, making Chara exert himself even after the puck's gone and the whistle's blown. Bickell's not a small guy at 6' 4" 233 pounds. And all he has to do is focus on Chara. Chara has to deal with Bickell AND defend the crease AND play the point on power play AND play 25+ minutes against Chicago's best, fastest forwards.

Chara left Kane wide open on Kane's first goal. No excuse. And although Chara scored the lone Bruins goal, his performance was one you'd like to forget but won't be able to for awhile.

Offensively the Bruins looked lost. Marchand without Bergeron is like Robin without Batman. The Bruins barely had an offense in this game. They were sloppy in the neutral zone, they turned pucks over, they didn't get pucks deep into the offensive zone. When they won possession battles there wasn't support to take advantage of it. The few good plays they made, like Jagr's moves through traffic from the halfwall to the net, were individual efforts, not team-based offense.

The Bruins managed 5 shots on goal in the 2nd period. Five! Then only 9 in the 3rd. They're facing a goalie who has shown repeated vulnerability and they're making his job easy by failing to force him to make saves. On average in this series, the Blackhawks are getting 5 more shots on goal per game than the Bruins. Crawford will allow goals. But you have to get shots on goal to make that happen.

Give credit to Chicago. Kane was brilliant, nearly scored a natural hat-trick. Patrick Sharp was robbed a few times in the 1st. The Blackhawks did a good job harassing the B's in the neutral zone. They controlled the ice in front of both nets. This was the Blackhawks' best performance in the series. And the Bruins' worst.

Game 6 tonight. Without Bergeron it's time to dig deep. Chara, Marchand, Seguin, Kelly, Peverley, everyone has to play up to their potential. And then find a way to play a little better.