Howe Chara Got His Groove Back 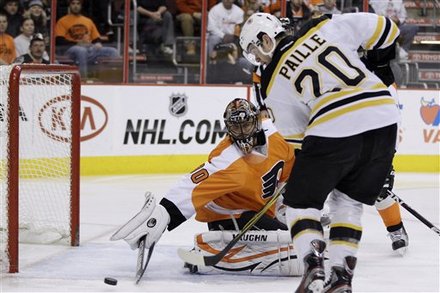 Zdeno Chara returned to the Bruins lineup and his impact was felt early and often. He was challenged to a fight 2:13 into the game. He scored a goal about 6 minutes later. And he completed his fourth career Gordie Howe hat-trick 7 minutes into the 2nd. Horton was an assist shy of accomplishing the feat.

This was a big test for the Bruins, and they Aced it. The Flyers had won 7 straight, they were atop the Eastern Conference standings, and this was the team that beat the Bruins on Opening Night, partially dampening the B's banner raising celebration. The Bruins got some revenge, and made a huge statement with this win.

The B's scored with deflections and rebound goals. Seguin's was the prettiest of the bunch, and it should have been stopped by Bobrovsky. But as ugly as the goals were, they were the products of good play and puck possession. Also, the Bruins' defensemen were excellent at getting shots at net. Those either went in, were deflected, or were juicy rebounds.

I have to give Julien tons of credit for getting this team to play this well on Saturday. They were flat in Ottawa, and instead of coming to Boston, then going to Philly, the B's stayed in Ontario. Claude gave the team a day off. I'm sure some guys relaxed, some guys went out and blew off some steam. But they all came back reinvigorated.

The Bruins had a full hour of penalties. That's bound to happen in a game against a rival like Philadelphia with a lopsided score. Horton's fighting major means that 10 different Bruins have dropped the gloves this season. That's more than half the skaters on the team.

Lucic got a boarding major, and it was a dirty hit. Thankfully everyone was okay, but I think a suspension is in order. It was a classic case of a defenseless player being checked between the numbers and into the boards.

Tim Thomas recorded his 30th career shutout and 4th of the season. He made some brilliant saves throughout the game. We all know the Tim Thomas story, but it's worth repeating. Drafted in 1994, didn't make his first start until January of 2006, didn't get his first shutout until later that month, and he now has 30. If Dominek Hasek and Martin Brodeur somehow had a son, and he was a late-bloomer, his name would be Tim Thomas.

The Bruins are now on top of the Conference, a month after being stuck in the bottom. They host the Canadiens tonight. Montreal is reeling, having lost 8 of their last 11. They also just fired their coach. This is a good chance to improve the Bruins' already impressive 9-2 divisional record.

Tebow is Human, Brady is Superhuman 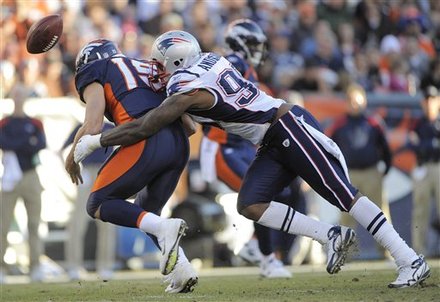 Before a big game, it's very rare that Tom Brady is in the shadows of an opposing QB. Tebow got the talk, the praise, and the hype. And I think people kind of forgot that Patriot games are typically decided by how well Brady's offense does against the opposing defense. After all, this is an 11 win team, despite having one of the worst defenses in the NFL.

Brady completed passes to 8 different receivers, but he favored the tight-ends. Hernandez had a monstrous day, 129 yards on 9 catches, plus a TD. Gronkowski had a quiet day, at least for him, with only 4 catches. Wide receivers only accounted for 12 of Brady's 33 targets.

I'm kind of worried about this tendency if Branch gets hurt. Or even worse, if they lost Welker. Ochocinco did catch a touchdown, he did make some key blocks, but he and Brady aren't only on different pages, they're reading different books in different languages. When Brady wants him to go deep, he cuts. There's no on-field chemistry.

The Patriots offense moved the ball, scored often, and didn't turn it over. That's a big reason why the Pats won. If you can't stop Brady and the boys, I don't care how magical you think your QB is, it's going to be a rough day for you.

Looking at Tebow's performance, and two things come to mind:

#1: He had a better day as a QB than he usually does. 11/22, 194 yards, and some of those incompletions were to avoid getting sacked. This speaks to how exploitable the Patriots defense is.

#2: He had a worse day than most QBs have against the Pats. 194 yards, an 80.5 rating. Last week Grossman had a 92.2 rating against the Patriots. Orlovsky had a 113.2 rating. The Pats average over 300 passing yards allowed per game. If a guy can't throw for 300 on this defense, they're simply not that good.

The Broncos did run the ball with alarming effectiveness. Their line created huge holes, and it was frightening how well Denver rushed.

Tebow ran for 93 yards. Of course, that doesn't factor in the 53 yards he lost when getting sacked.

However, if you want to try to win a game on the ground, you'd better avoid putting the football on the ground. That's where this game was ultimately decided. The Patriots did not turn the ball over. The Broncos lost 3 fumbles. There's nothing mythical or magical about it. It's football.

Anyway, the Patriots are 11-3, and they've clinched their 9th AFC East title in the Belichick-Brady era. I know that we won't be having a duckboat parade for a divisional title, but these used to be rare up here. This franchise had only made 10 playoff appearances (only 5 of those were divisional wins) before Brady and Belichick. And in 11 years, that number has nearly doubled.

This has been something special up here in New England. It's still going strong after 11 years.